In this episode: Sean Wilentz is a Princeton professor and the Bancroft-Prize-Winning Author of The Rise of American Democracy. He’s also a major music historian and the author of Bob Dylan in America, and the official historian of Bob Dylan’s website. His new book The Politicians and the Egalitarians: The Hidden History of American Politicsargues that there are two keys to understanding American politics––the theme of party politics and outsider resistance to it, and the theme of economic and social egalitarianism. He argues that all positive change in American political history has happened within the system of party politics.
On this week’s episode of Think Again – a Big Think Podcast, Wilentz and host Jason Gots discuss identity politics, human life on Mars, and the culture war that began when the counterculture “won” the battle in the late ’60s, and which Wilentz argues is reaching a final cataclysm with the election of 2016. 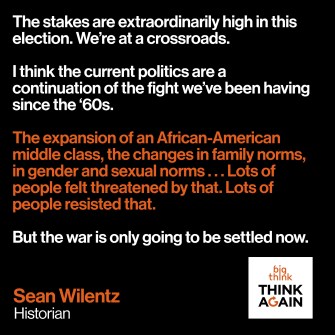 Australian researchers have found that fiber can help lessen the reaction to food allergies, and even cure a person of them.