In New York City, where we all live in little boxes on top of one another, “Ignore thy neighbor” is a reasonable coping strategy. Live and let live, right? To each her own.

But what’s the tipping point at which thy neighbor becomes simply too numerous, too loud, too different to ignore? I’d submit that whoever you are. Wherever you locate yourself on that spectrum of tolerance. You too, have your limits.

In the mid 1980s, a group of people in Oregon discovered their tipping point when a massive commune moved in next door. The Baghwan Shree Rajneesh and thousands of his followers decided to build a city in the middle of nowhere—a utopia on Earth. Only it was the middle of somewhere for the mostly white, mostly Christian residents of a tiny nearby town. It was home, and like most humans, they weren’t too excited about the idea of radical, unexpected change in their own backyard.

I, on the other hand, am very excited to be here today with the Way Brothers — Chaplain and MacLain… They’re the directors of the fabulous Netflix documentary Wild, Wild, Country, which tells the very American story of this clash of cultures. There’s god, guns, sex, and mutually exclusive concepts of liberty. Like I said – it’s about as American as it gets. 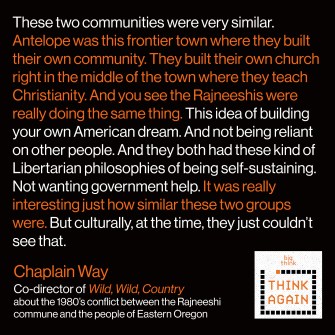 Related
Sponsored
How to avoid family fights about money
No family is immune to money conflicts, no matter how much they love each other. Here’s what to look out for.
L&D strategy
Best practices for a needs analysis [Templates included]
Conducting a thorough needs analysis requires care, curiosity, and open-mindedness.
Neuropsych
Memory and the benefits of forgetting
Forgetfulness isn’t always a “glitch” in our memories; it can be a tool to help us make sense of the present and plan for the future.
The Learning Curve
5 Stoic quotes to help you through difficult times
“We suffer more often in the imagination than in reality.”
Starts With A Bang
The good reasons scientists are so hostile to new ideas
Many people out there, including scientists, claim to have discovered a series of game-changing revolutions. Here’s why we don’t buy it.
Up Next
Mind & Brain
“Another nail in the coffin for learning styles” – students did not benefit from studying according to their supposed learning style
The idea that we learn better when taught via our preferred modality or “learning style” – such as visually, orally, or by doing – is not supported by evidence.