The Vatican is hosting a 36-hour “hackathon”.

The event, called ‘VHacks’ (because, of course!), brings together 120 students, who are right now in the middle of a 36-hour hackathon to solve what the Catholic Church believes are three of its primary concerns that need solving: social inclusion, interfaith dialogue, and assistance for migrants and refugees. 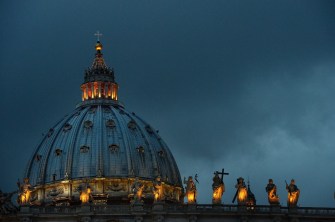 The effort was the brainchild of three people: Jakub Florkiewicz, a student at Harvard Business School, Reverend Eric Salobir, who is the founder of a technology think tank affiliated with the Vatican known as Optic, and Monseigneur Lucio Ruiz from the Vatican’s Secretariat for Communication.

Co-organizers for the event are the Pontifical Council for Culture and the Migrants and Refugee section of the Dicastery for Integral Human Development. Some tech partners, including Google, Microsoft, and Italian telecommunications company TIM have also signed on.

Salobir concurs. “The point is not just to use it for the parishioners or the congregations, but to use technology for a broader purpose, to help society.”

One of the inspirations for the event was Pope Francis himself, who said in his 2017 TED talk, “How wonderful would it be if the growth of scientific and technological innovation would come along with more equality and social inclusion.”

Related
13.8
What kind of intelligence is artificial intelligence?
The initial goal of AI was to create machines that think like humans. But that is not what happened at all.
The Present
What’s effective altruism? A philosopher explains
Some effective altruists “earn to give” — they make as much money as they can and then donate most of it to charities.
Sponsored
How to avoid family fights about money
No family is immune to money conflicts, no matter how much they love each other. Here’s what to look out for.
L&D strategy
Best practices for a needs analysis [Templates included]
Conducting a thorough needs analysis requires care, curiosity, and open-mindedness.
Neuropsych
Memory and the benefits of forgetting
Forgetfulness isn’t always a “glitch” in our memories; it can be a tool to help us make sense of the present and plan for the future.
Up Next
Diversity & Inclusion
What the PyeongChang Winter Olympics Taught Us about Diversity & Inclusion
In an increasingly global and connected world, cultural diversity and inclusion are of great importance. While many organizations realize the role an effective diversity training program can play, there is […]