Ben Goertzel is a hugely influential computer scientist and author in the area of artificial general intelligence, among others. Just a few of the many hats Ben wears or has worn: Chief Scientist of Hanson Robotics which makes some of the most advanced robots in the world, Co-founder of AIDYA – artificial intelligence for financial trading, and Chairman of the OpenCog Foundation, an open source project to build a radically new form of artificial intelligence.

What’s real and what’s hype in all the talk about artificial intelligence these days? Will teaching AI to solve humanity’s biggest problems keep robots from harming us if and when they become autonomous? Is the human brain, with all its limitations, a good model for AI at all?

In this episode, Ben explains to Jason some of the theory behind various existing and potential AI systems, weighs in on the idea of the Singularity, and touches on his “panpsychist” belief that consciousness is an omnipresent force of nature. 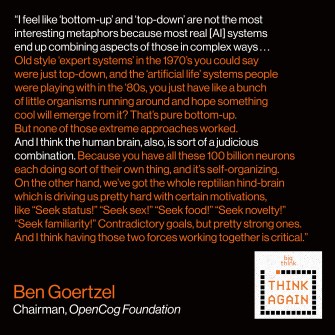 Alva Noë: “You are Not Your Brain”

Related
Hard Science
Some earthquakes last for seconds, others for minutes — and a few for decades
What do you call it when the Earth shakes for three decades?
Sponsored
What childhood “money story” is shaping your financial behaviors?
Here are the signs that you inherited “money anxiety” from your parents.
The Present
The “maritime Indiana Jones” who salvages shipwrecks now wants to tow icebergs
Simple physics makes hauling vast ice chunks thousands of miles fiendishly difficult — but not impossible.
Neuropsych
Inside the brains of aging dogs
In a citizen science project, thousands of pet dogs are helping scientists to understand what happens to memory and cognition in old age.
Neuropsych
The most common source of awe might surprise you
It’s us.
Up Next
Culture & Religion
Hans Rosling Had a Way of Showing the Meaning In Data. We’ll Miss Him.
An affectionate sendoff for popular beloved global-health statistician Hans Rosling.