In the past few years, the changing role of formal education has finally become a mainstream topic of discussion. While we talk about the need to shift its focus to nurturing autonomy, creativity, cooperation, and other life skills in our kids through changes in curriculum, we need to also look at the physical spaces that our children occupy and how they aid or hinder this change.

The Fuji Kindergarten, located in Tokyo, Japan, is a wonderful example of blending new educational principles with innovative forms of architecture. Designed by husband and wife duo Takaharu and Yui Tezuka of Tezuka Architects, it is a spacious, open building that covers 1,304 square meters. The building was designed for a Montessori Kindergarten that teaches more than 500 children and is the biggest in Japan. 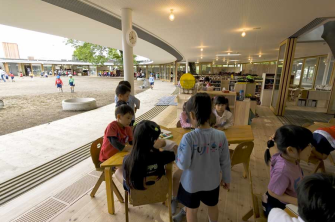 The kindergarten is in the shape of an oval with a perimeter of 183 meters. Along this perimeter are located classrooms with sliding doors and no fixed walls; trees that grow through the building; and a wide, flat roof, where kids can run around the entire day. The space has no front or back, beginning or end, and wonderfully blends the inside with the outside, maximizing the space available for secure, but unconstrained play. Movable wall partitions, as well as the climate, allow for the space to be open eight months in the year. 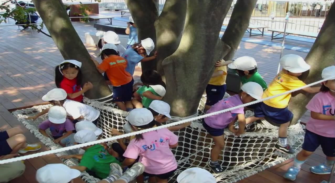 The space allows for free movement and increases the feeling of community. There is no hierarchy in the classrooms, no one sitting at the back or the front. If a kid doesn’t like a certain class, she can just move to another class group. The open space is designed in such a way that it lets in just the right amount of background noise. As the architects say, contrary to what most people think, children actually lose concentration when it is too quiet. 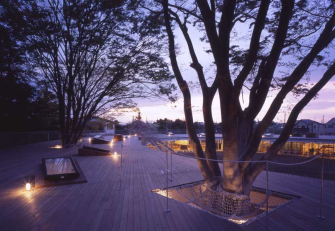 The roof is one of the most remarkable features of the building. It was the main inspiration for the design.

“We found out children love to keep making circles. If we bring two children under six, they keep making circles and don’t stop. It’s a kind of nature instinct, just like the instinct of a small puppy trying to reach its own tail. So, we made it a circle that they can keep running around,” says Takaharu Tezuka.

Indeed, they do. The architects tracked the movements of the children, and found out that without any structured activity, the kids run an average of six kilometers (3.7 miles) every morning. The roof is inclined toward the inside and only 2.5 meters high. It can easily become a large viewing deck, where 600 kids can sit in the front row to watch a performance or other event taking place in the enclosed central courtyard. 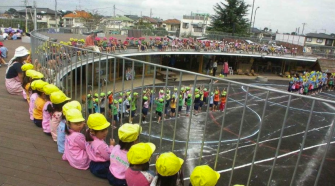 Watch the inspiring and amusing TEDх talk of Takaharu Tezuka, where he talks more about the design of the kindergarten and its functions.

Video cameras on city streets are only the most visible way your movements can be tracked.
Up Next
Technology & Innovation