Amazon is on a roll. Its stock has climbed ever-upward as big-name retailers across the world are shutting down brick-and-mortar stores because online ordering is the fastest-growing retail sales sector.

And Jeff Bezos, the founder of Amazon, just passed $100 billion in wealth—a first in the yearly Forbes list.

At the same time, Amazon’s staff is frequently part-time with limited or no benefits, lower wages than similar industries, and working conditions that can border on brutal.

So when is it a good thing for billionaires to keep getting richer?

Some multi-billionaires such as Bill Gates, Warren Buffet, and Mark Zuckerberg have philanthropic foundations and have also signed onto Giving Pledge, which means they will eventually donate most of their fortunes to charities and philanthropical entities. It could be argued they are “good” billionaires.

But then, you have those who actively harm the effort to end the economic divide that threatens entire countries and add to the destruction of our world in various other ways, such fighting renewable energy. 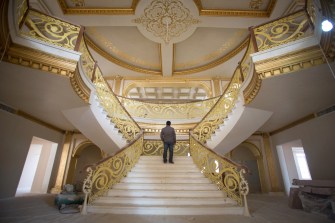 So, which is Bezos?

It remains to be seen; he is “thinking” about how he will use his fortune for good, but hasn’t really decided. Meanwhile, that pile o’ cash keeps growing.

Since he’s CEO and Chairman of Amazon, a start might be to turn the company into a stellar employer that provides a shining example of how to treat employees in positive ways. As an example, before they sold their company in 2000, the founders of Ben and Jerry’s ice cream Ben Cohen and Jerry Greenfield did just that; the company’s wages and benefits were legendary and the founders signed on to agreements that improved conditions for migrant workers. They also partnered with organizations such as World Wildlife Fund and released a flavor (“Bernie’s Yearning”) supporting Bernie Sanders in the 2016 Democratic Party primary election campaign. Most recently, they jumped into the marriage equality campaign in Australia.

There are “good” billionaires and bad ones, and some in between. Where do you think Jeff Bezos will end up on that scale?

Related
Life
Scientists use CRISPR to insert an alligator gene into a catfish
Disease kills off 40% of farmed catfish. This gene protects them.
Neuropsych
How you breathe affects your brain
Your breathing rhythm influences a wide range of behaviors, cognition, and emotion.
Health
What happens when regular porn watchers abstain for a week?
Researchers watched for signs of withdrawal — but didn’t find any.
Neuropsych
Daily caffeine intake temporarily alters your brain structure
Compared to people who took a placebo, the brains of those who took caffeine pills had a temporarily smaller gray matter volume.
Thinking
Why you should laugh at yourself, according to Seneca and Nietzsche
“It is more human to laugh at life than to lament it.”
Up Next
Starts With A Bang
Earliest Evidence For Stars Smashes Hubble’s Record And Points To Dark Matter
The indirectly find was completely unexpected, and, if it holds up, could give the James Webb Space Telescope its first tantalizing target.In the quest to understand our Universe, and the […]