Comedians use a lot of death-related terminology both on-stage and off. Terms like “I died up there” (bad performance) or “I murdered the crowd” (good performance) are pretty commonplace. But according to a recentlypublished study by the International Journal of Cardiology and the the Australian Catholic University, the funnier you are, the more likely you are to die.

The real kicker is that the higher ranked comedian you were (according to the crowd-based ranking over at Ranker) the more likely you are to die: for each 10 points higher you were (towards the number 1 ranked comedian) there was a 7% increased risk of you dying. For example, compared to the 150th ranked stand-up comedian, the 50th was 70% more likely to die.*

It should be noted that many stand up comedians tend to be solitary performers who travel alone a lot, and that depression in comedic performers is hardly a new phenomenon. And while crowd-sourced ranking sites might not exactly be the most scientifically or editorially sound, the study itself lends truth to the age-old adage / Billy Joel lyric that “only the good die young.” 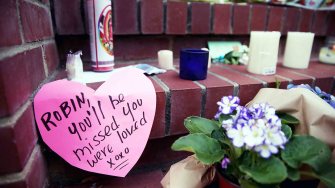 Flowers and pictures that are part of a growing memorial sit on the steps in front of the home where actor and comedian Robin Williams filmed the movie Mrs. Doubtfire on August 12, 2014 in San Francisco, California. Academy Award winning actor and comedian Robin Williams was found dead in his Marin County home on Monday of an apparent suicide. He was 63 years old. (Photo by Justin Sullivan/Getty Images)

The fruits of long-term thinking will reveal themselves in five or ten or 30 years, when you’ve created the future you’ve always wanted.
Videos

Astrophysicist Michelle Thaller explains how a solar storm could wipe out civilization… and what we can do to prevent catastrophe.
▸
5 min
—
with
Michelle Thaller
13.8

The Copernican principle states that Earth is an ordinary planet, but that does not mean that life is ordinary in the universe.
High Culture

The Russian writer’s scorn went beyond a difference in taste; Leo Tolstoy virulently hated everything Shakespeare had come to stand for.
Up Next
Surprising Science

More Americans Are Giving Up on Losing Weight. Where Do We Go From Here?

New research shows that more Americans are giving up on weight loss. How can we change this trend?