Like any other system, capitalism has its positive and negative qualities. Inarguably, it has lifted nearly a billion across the globe out of extreme poverty, between 1990 and 2010. But as with other socioeconomic systems of the past, such as with feudalism, a time can come when revolutionary changes make such systems anachronistic. So too has capitalism’s time come, at least the kind which exploits the biosphere.

A more sophisticated system must replace it. One reason is because we are on the verge of a technological shift which will make almost all working and middle class jobs obsolete within the next 25 years or so. Currently, middle and working class families are already getting squeezed in developed countries. Their wages have remained stagnant for decades while costs have steadily risen.

Today, 15% of the US population is below the poverty line. If you include children under age 18, the number is 20%. All the gains in productivity over the last several decades have gone to the top one percent of income earners, while the economic prospects for the vast majority stagnated or worsened. Then there’s the environmental impact. We’re about to kick off the sixth great extinction event, and we’ll follow shortly after.

10% of all animals and plants will vanish from the Earth by 2050, according to biologists from Leeds University in the UK. That’s over a million species, all due to human enterprises, leading to what’s being called anthropogenic climate disruption (ACD). Say goodbye to leatherback turtles, rhinos, elephants, and almost every large predator. There’s a reason why the “Doomsday Clock,” which used to predict the likelihood of nuclear annihilation, is now two minutes and thirty seconds from midnight. It crept closer by half a minute last January. Elephants and other large land animals aren’t expected to be with us much longer.

Deforestation, infrastructure projects, overfishing, commercial agriculture, and widespread usage of fossil fuels are together, causing an extinction rate 1,000 times faster than all other events in the last 65 million years. Overfishing alone is set to erase commercial fishing by 2050, as marine environments will no longer be able to replenish themselves. No one knows how this will effect world ecosystems or human populations. Three billion people in the world today depend on fish as a part of their diet.

Yale sociologist Justin Farrell says that corporations have used their great wealth for over two decades to sew uncertainty about climate change in the public, to a level that doesn’t exist among the scientific community. The authors of the book Climate Change, Capitalism and Corporations, say companies will only become more exploitive. This linear, constant growth model can only hollow out the Earth and exhaust all resources, leaving nothing behind. But it isn’t just the destruction of the environment. Overpopulation also plays a role.

By midcentury, there is set to be an explosion of city dwellers. This will result in overcrowding, greater spreading of infectious diseases, and more strain on water supplies and sanitation. Since our cities are terrible at conserving energy, more fossil fuels will be consumed, accelerating global warming. We’ll also see more deaths from air pollution.

Sea levels are rising 25% faster than predicted in the 1990’s. Most people in the world live by the coast or rivers. The National Oceanic and Atmospheric Administration (NOAA) warns that US coastal cities will see daily flooding by 2050. While some places grow wetter, others become dryer. Those cities that get their water from snowmelt will see less and less of it. This includes the parched but highly populated American Southwest, not to mention Southern California—the most populous state. 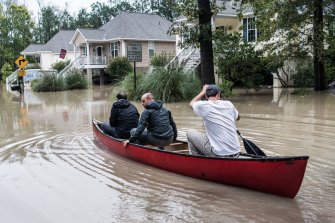 US coastal cities could see near daily flooding by 2050, the NOAA warns.

Today, 1.1 billion lack proper access to water. But that number is expected to grow to two billion by 2050. Another 9.7 billion will live in water stressed areas, according to researchers at MIT. Lack of water to irrigate crops could also threaten the global food supply. Food production will drop two percent by 2050 projections claim, with staples like corn, wheat, and millet yields plunging 10%, one forecast claims.

Climate change, “unbridled consumption” and overpopulation have lead Prof. Frank Fenner of Australian National University, to predict that humanity will be extinct within a century.  Fenner is an emeritus professor of microbiology, famous for helping rid the world of smallpox. He told The Australian in 2010 that he believes the decline of humanity is irreversible.

Fenner used the disappearance of the inhabitants of Easter Island as an example. It was sudden population growth which swallowed the resources of the island, making the civilization that formed there unsustainable. “There will be a lot more wars over food,” Fenner predicts. Water resources might become another flashpoint. China and India have already fought over disputed water rights, and lots of hotspots around the world could easily plunge into war.

Evolutionary biologist Jared Diamond had called the comparison between our global situation and Easter Island “chillingly obvious.” Fenner’s colleague, retired professor Stephen Boyden, is more optimistic. It isn’t scientific capability but the political will that serves as an obstacle, he said. 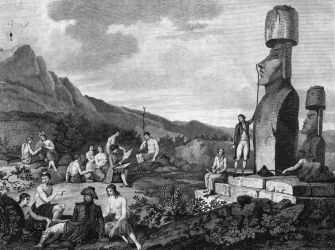 Easter Island’s advanced society dried up by the time Europeans arrived, due to over population and a lack of resources.

Shared ownership is one idea that can have a powerful impact. 70% of the public stock exchange today is owned by fund managers and financial institutions that have no stake in the areas where companies operate. Meanwhile, equity in such companies is controlled by a CEO and a handful of top executives. If we got corporations or their equity into the hands of the stakeholders who live where these companies operate, the ability of those enterprises to exploit the environment would become limited. Cooperatives and other forms of collective enterprise could also work. But these actions won’t be enough.

We’ll have to decide on an individual basis to vote with our dollars. Those companies who are ecologically exploitive should see their customers run to responsible competitors. More peaceful demonstrations and protests must be conducted to keep the issue in the public’s mind. We also have to change how we live, dramatically. Everyone should recycle, eat less meat, and compost. Clean energy initiatives should be erected at the largest scale possible. The food waste problem must also be addressed. Almost 800 million worldwide suffer food insecurity today, while a fifth of the world’s food is lost through waste or overeating. Dramatic changes must occur or the Earth will lose much and we may lose it all.

The researchers and patients are excited to see if color vision will develop over time.
Up Next
Culture & Religion

Yale psychologist Paul Bloom suggests a bit of reason in your feeling in his new book, Against Empathy.