You’d think that countries cognizant of gender inequality and who do more to address it would see more women graduating with science, technology, engineering, or math (STEM) degrees. Alas, a recent study finds quite the opposite. Researchers at the University of Missouri, along with colleagues at Leeds Beckett University in the UK, found that women in the developing world, where it’s thought there’s greater gender inequality, are more attracted to STEM fields than those in the developed one. The study’s findings were published in the journal Psychological Science.

Even though girls perform similarly or better than boys in science and math in many countries, the more gender equality a nation has, the fewer female STEM graduates exit its universities. That wasn’t true for the organic sciences however, just the inorganic ones. The negative correlation is termed the “gender-equality paradox.” Professor of psychological sciences David Geary, at the University of Missouri’s College of Arts and Sciences, was one researcher on this study.

He said in a press release:

“We analyzed data on 475,000 adolescents across 67 countries or regions and found that while boys’ and girls’ achievements in STEM subjects were broadly similar in all countries, science was more likely to be boys’ best subject. Girls, even when their abilities in science equaled or excelled that of boys, often were likely to be better overall in reading comprehension, which relates to higher ability in non-STEM subjects. As a result, these girls tended to seek out other professions unrelated to STEM fields.” 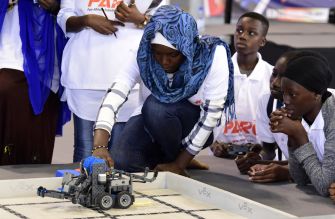 A STEM teacher in Senegal. Females in the developing world today find STEM fields more attractive than their counterparts in the developed world. Credit: Getty Images.

It wasn’t that girls did more poorly in math or science. Instead, their personal strengths lay more in reading and language arts than math and science. People tend to choose professions which require skills they’re good at. So girls are self-selecting to enter fields where reading comprehension is paramount, even though they may have the skill set necessary to excel in STEM.

This could explain why STEM fields have had about the same number of workers from each gender for decades and why current strategies to help attract a greater number of women to STEM have fallen flat. The trend was most pronounced in places like Norway, Finland, and Sweden. Although this region is known for policies and a cultural outlook that supports greater gender equality, relatively few girls pursue STEM degrees there, when compared to places like Algeria or Turkey.

Geary said of the findings:

“In countries with greater gender equality, women are actively encouraged to participate in STEM; yet, they lose more girls because of personal academic strengths. In more liberal and wealthy countries, personal preferences are more strongly expressed. One consequence is that sex differences in academic strengths and interests become larger and have a stronger influence on college and career choices than in more conservative and less wealthy countries, creating the gender-equality paradox.”

Wealthier nations tend to have greater economic opportunities, allowing women to make choices based on factors beyond mere economics. In poorer and less gender-equal countries, however, women find that employment opportunities aren’t so easy to come by, and so the security and good pay that comes with a STEM career attracts more women. Researchers believe their findings might help create more targeted strategies to reach girls and women in developed countries, in order to encourage them to take up a field in STEM.

Related
Life
Scientists use CRISPR to insert an alligator gene into a catfish
Disease kills off 40% of farmed catfish. This gene protects them.
Neuropsych
How you breathe affects your brain
Your breathing rhythm influences a wide range of behaviors, cognition, and emotion.
Health
What happens when regular porn watchers abstain for a week?
Researchers watched for signs of withdrawal — but didn’t find any.
Neuropsych
Daily caffeine intake temporarily alters your brain structure
Compared to people who took a placebo, the brains of those who took caffeine pills had a temporarily smaller gray matter volume.
Thinking
Why you should laugh at yourself, according to Seneca and Nietzsche
“It is more human to laugh at life than to lament it.”
Up Next
Sex & Relationships
Men want beauty, women want wealth, and other unscientific tosh
If mating preferences are biologically predetermined, individual sexism shouldn’t have an impact. But it does.