The toll from the Paris terrorist attacks; 129 dead, 352 injured, billions frightened. Relatively few victims, yet global fear. Why? What is it about this particular threat that gives it such inordinate emotional power, far beyond the danger that it actually poses to most of us. Why does terrorism terrorize? And why, though many other global perils threaten us far more, does fear of terrorism uniquely bring the world together?

Three characteristics make this threat emotionally unique. First, it’s random, unpredictable. Guns and grenades here, car bombs there. A train in Spain. Busses in London. Buildings in New York, Beirut, Baghdad. We don’t know when or where the next attack will come.

And we don’t know who is out to get us. Yes, extremists fall into general patterns. Some act in the name of religion – Islam, Judaism, Christianity, Hinduism – to excuse their murderous rage. Some invoke the superiority of their race, their nationality, their culture. Some are angry at repressive governments. But just who the individuals are who will show up unexpectedly with guns and bombs and murderous rage, we don’t know.

So we don’t know who might attack us, when, where, or how they might do it. We don’t know what we need to know to protect ourselves. That uncertainty, that powerlessness, helps make terrorism particularly frightening. And it explains why we are willing to go to such lengths, including paying the high price of giving up some civil liberties, to reduce the threat. More police surveillance cameras, expanded government powers for intelligence gathering, increasingly invasive security checks at airports and borders, are costs that people in many nations have been willing to pay to reduce the uncertainty that we might be attacked.

Terrorism, and mass murders and plane crashes and big industrial accidents, kill a lot of us all at once in one place, which research in the psychology of risk perception has found magnifies the fear.

Second, terrorist attacks terrorize because they kill and injure a lot of people all at once. Many causes of death kill far more people, but they are what public health experts call ‘chronic’. The number of victims of hunger, and infectious disease, and climate change-connected severe weather events far exceeds the number of victims of terrorism, but those deaths are spread out across time and space. Terrorism, and mass murders and plane crashes and big industrial accidents, kill a lot of us all at once in one place, which research in the psychology of risk perception has found magnifies the fear. Our greater concern about what that research calls ‘catastrophic’ risks is why such events get more attention from the news media, and extensive coverage of terrorism magnifies fear yet further.

But perhaps the most powerful psychological reason terrorism terrorizes is that we all worry that it could happen to us. We all feel that we could be the next target, the next victim. In a restaurant, a mall, at a concert, in a bus or plane or train or just walking down the street. Minding our own business. Going about our normal lives. We are, all of us, at any time, potential terrorist targets.

Never mind that the numerical odds are low (roughly 1 in 20,000 in Paris from this attack, roughly 1 in 110,000 in the U.S. on 9/11/01). Emotionally such odds mean little. If you think you might be the numerator, the one, your fear will be real, though it exceeds the statistical risk.

This emotional risk perception factor – the vulnerable sense that “It could happen to me” – explains why anyone in the civilized world feels threatened by what happened in Paris, and what has happened in Tokyo and Mumbai and Barcelona and London and Nairobi and Oklahoma City and New York and Boston. The terrorists are lashing out at the normal world they see as their oppressor. “The civilized world”, as President Obama has put it. Our world. You and me.

This emotional factor explains why many of the world’s most famous buildings were illuminated in French bleu blanc et rouge within hours of the attacks. 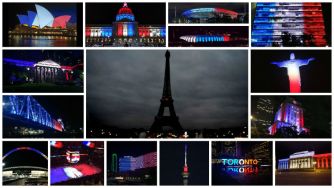 It’s why many of the leaders of the world, including the leaders of China and Russia, and the Pope, spoke out in solidarity with the French. It’s why German Chancellor Angela Merkel said what she said to the French;

“We are so close with you,” said Ms. Merkel, dressed in black. “We are crying with you. Together with you, we will fight against those who have carried out such an unfathomable act against you.”

Chancellor Merkel’s “we” means more than Germans. It refers to all of us in the normal world. We all feel Paris’ pain, and fear, because those feelings, particularly the fear, are ours.

Sadly this psychology also explains why the terrorist bombings in Beirut (43 dead, 200 wounded) and Baghdad (at a funeral, 19 killed and 30 wounded), just hours before the attacks in Paris, drew much less international attention. Sectarian terrorism that targets particular groups doesn’t target everyone. If we don’t belong to the group under attack, we aren’t threatened. We don’t worry. We shed no tears. We don’t demonstrate solidarity. Which is why the civilized world that is so ready – so EAGER- to fight back against Daesh (a more accurate and derisive name for the group that is falsely validated with labels like Islamic State), does little when Sunni Muslims terrorize Shiites, or radical Hutu Rwandans slaughter Tutsis, or Palestinians murder Israelis and vice versa. Tribe-on-tribe violence doesn’t threaten the greater tribe – humans – to which we all belong.

Too bad we don’t feel that way about global perils that threaten us all and will do infinitely greater harm than terrorism; climate change, the decreasing effectiveness of antibiotics, the peril of a quickly spreading pandemic in our globally-connected community.

But attacks like the one in Paris are against everyone outside the Daesh tribe, Muslims included. While that makes us all afraid, it’s also what brings us together. Shared fear reminds us that we are all citizens of the global village, that despite our many differences we are all connected, concerned for and even responsible for one another at the primal level of survival. The outpourings of support and offers of assistance to victims after terrorist attacks anywhere are evidence of this connection.

Too bad we don’t feel that way about global perils that threaten us all and will do infinitely greater harm than terrorism; climate change, the decreasing effectiveness of antibiotics, the peril of a quickly spreading pandemic in our globally-connected community. Those much greater threats don’t have the emotional characteristics that make them as personally and viscerally frightening as terrorism feels.

But perhaps these post-terror attack moments of increased global togetherness might remind us of our connections with and responsibilities for each other. After all, we are all members of the human tribe and what helps that tribe survive helps us as individuals. Remembering that, and coming together not just to fight terrorism but to protect ourselves from other shared dangers, would be a great way to honor the victims of terrorists who, by spreading fear, also promote a sense of human connection around the world that can help us all stay safe.

Related
Starts With A Bang
The Universe’s most unbreakable symmetry
The combination of charge conjugation, parity, and time-reversal symmetry is known as CPT. And it must never be broken. Ever.
13.8
The weirdness of quantum mechanics forces scientists to confront philosophy
Though quantum mechanics is an incredibly successful theory, nobody knows what it means. Scientists now must confront its philosophical implications.
Neuropsych
Why is a Starbucks loyalty rewards program making customers so angry?
The rewards price to get a free cup of hot coffee at Starbucks is going up.
Empowering growth
7 essential management training topics for every team leader
From emotional intelligence to problem solving, these management training topics will set team leaders up for success.
Thinking
What if you could rewire your brain to conquer suffering? Buddhism says you can
For Buddhists, the “Four Noble Truths” offer a path to lasting happiness.
Up Next
Starts With A Bang
Starts With A Bang just got more rewarding!
Most of you know that we run a Patreon campaign for Starts With A Bang, enabling us to bring you the best content in the Universe, ad-free, here on Medium.We’ve […]