The company, inkbox, currently ships about 60,000 “semi-permanent” tattoos each month to more than 150 countries, according to Reuters. The new investment follows an initial round of funding that raised $3 million for the startup.

On the inkbox website, customers can choose pre-designed tattoos or upload their own designs for about $20 to $30, plus shipping. The tattoos appeal to “millennials in their prime spending years,” according to CEO Tyler Handley, who told Reuters his company pays Instagram influencers to promote its products. The ink lasts 8 to 18 days.

The temporary tattoos, as VICE wrote, are perfect “for the person who wants to express themselves but doesn’t know WTF they want.” Among the designs offered on the website are stylized maps of the world, an outline of a spider, flowers, geometric shapes, a diagram of the planets and phases of the moon, a skull, and the word “love”. 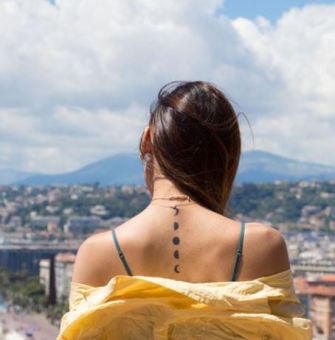 These designs come from graphic design and tattoo artists, whom receive a cut of the profits after the tattoos are purchased.

Inkbox says its ink comes from the Genipa Americana plant, a type of tree found in tropical forests, which native peoples have used in tattooing and “body ornamentation for thousands of years.”

Other technologies for temporary tattoos, including one using translucent film and another that made possible ‘scratch-n-sniff’ tattoos, were developed over the decades, and now there are a host of digital companies that have capitalized on the longstanding trend, like StrayTats, Sticker You, and 24hourtattoos, in addition to inkbox.

The success of temporary tattoos is likely associated with the increasing popularity of traditional tattoos. According to a 2016 Harris poll, 29 percent of American adults have at least one tattoo—up from 21 percent in 2012, and up from 6 percent in 1936. About 23 percent of those with tattoos, according to another survey, regret the decision. Still, the tattoo industry is often called one of the fastest growing in the country after booming 440 percent from 2005 to 2015.

Every mid-December, the Geminid meteor shower reaches its peak. Its 2021 show will be spectacular, but only if you do it right.
Up Next
Culture & Religion

“We find that Trump’s anti-Muslim tweets are highly correlated with the number of anti-Muslim hate crimes, particularly where Twitter usage is high, but only after the start of his presidential campaign.”