Nearly a third of American workers say they are less productive at work after the American presidential election which landed Donald J. Trump in office. This according to a survey of 500 American workers conducted by Wakefield Research and workplace consultants Betterworks.

According to the Betterworks study: 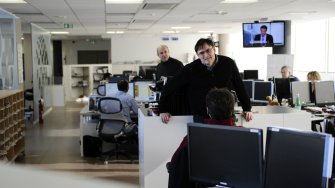 Confrontations over political views may start out as benign discussions before escalating into outright arguments (Photo by Lionel Bonaventure/Getty Images).

There is also a generational aspect to be mindful of in this issue.

This confirms other research that was conducted before the 2016 election, such as a survey by the American Psychological Association (APA) titled Politics in the Workplace: 2016 Election Season.

According to the APA Study:

On a deeper level, all this serves as an interesting and underexplored way in which toxic politics can hurt businesses – by exasperating the workforce. For managers, this presents a particular dilemma because of the need to encourage a workforce that is both motivated and focused. Immediately after the election, some managers held debriefing sessions or sent emails to the entire staff stressing the need for respecting colleagues.

Betterworks provides a few tips for managers on how to navigate such circumstances:

When justice isn’t tempered by something such as mercy, forgiveness, or nonviolence, efforts to make society more equitable often backfire.
Up Next
Technology & Innovation

We Need Better Maps for Our Self-Driving Cars

For autonomous self-driving cars to truly take over, every road needs to be digitally mapped.