The stereotype of Sweden as a liberal utopia of robust sexual health was somewhat complicated recently in the American imagination by the biker gangs, neo-Nazis, and serial killers that populated the Stieg Larsson trilogy.

Further complicating things is Sweden’s bold experiment on Twitter. Each week, the nation turns over its official twitter feed to a different citizen. Last year, when @Sweden was launched, the Internet briefly registered it as an intriguing new twist on the idea of the “voice of the nation.”

This week, when Sonja took over, things became really interesting. Sonja describes herself as “Holy mother of two. Grew up side by side with awesome nature. This is exciting.” She’s a prolific and uninhibited tweeter. Almost immediately after taking over, she got onto the subject of Jews. 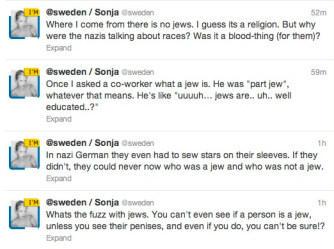 Not surprisingly, offended Tweeters worldwide jumped all over her. Clumsy and crassly expressed as the sentiment was, Sonja was speaking against anti-Semitism, which is more of a national problem in Sweden then I suspect the country would normally like to admit. “What’s the fuzz with Jews?” doesn’t make a great tag line for a “Visit Sweden” campaign.

After responding to the firestorm of criticism, Sonja followed this up with a string of tweets about her unusual ability to “fold her breasts” up to her face.

Whether you view Sweden’s Twitter experiment as a diplomatic disaster or a prescient redefinition of national identity in the age of social media, you’ve got to admit there’s something interesting going on here. It’s reminiscent of what happened in Israel recently at the height of official tensions between the Knesset and Ahmadinejad.

A few twentysomethings tired of all the saber rattling put up a Facebook page called “Israel loves Iran.” Within days, tens of thousands of Israelies had “liked” the page. In response, students in Iran built a mirror page called “Iran loves Israel.” These were very real expressions of national sentiment, which would otherwise have been completely invisible on the world stage. None of this is likely to result in immediate global disarmament or the tearing down of embassies, but it represents a kind of evolution in the discourse of nationhood, especially when contrasted with the tightly controlled speech of the world’s rising superpower, China.

The media response to Sonja’s ranting has been almost universally negative. Personally, I’m enjoying Sonja’s exuberant, unfiltered tweets (with the exception of one horribly misguided joke about AIDS…), and find Sweden’s experiment a refreshing and promising change from stodgy old national politics as usual.

Like Dua Lipa, he had to create new rules.
Up Next

This morning Ibrahim Mothana, an incredibly smart and funny young Yemeni, has an op-ed in the New York Times on Drones, Yemen and blowback.  I would encourage you all to […]