Gillian Anderson and David Duchovny never expected “The X-Files” to be a hit when it first aired in 1993. But what was perhaps more surprising to Anderson was the impact her character Dana Scully—a sharp, skeptical medical doctor turned FBI agent—would have on female fans of the show.

It’s known as the “Scully Effect,” and it describes how many women have cited the character as inspiration for their decision to enter careers in science, medicine, or law enforcement.

“We got a lot of letters all the time, and I was told quite frequently by girls who were going into the medical world or the science world or the FBI world or other worlds that I reigned, that they were pursuing those pursuits because of the character of Scully,” Anderson told a crowd at the 2013 San Diego Comic-Con International. “And I said, ‘Yay!’”

Now, a new report brings some data to back up the claim.

The Geena Davis Institute on Gender in Media, a nonprofit research organization and advocacy group, and 21st Century Fox conducted an online survey that asked 2,021 women to rate how the character Dana Scully influenced their career choices and attitudes. The survey respondents were all female, all ages 25 or older (so they would have had a chance to enter the workforce, and have seen the show), and comprised an overrepresentation of women in STEM fields and fans of the show.

Anderson and other female writers described the Scully Effect in a video after the report was released.
The report also included a word cloud featuring the most frequently cited words respondents used to describe Sully. 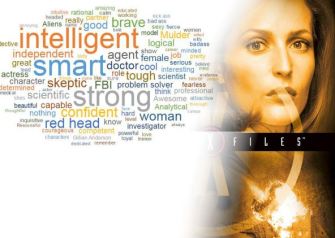 Madeline Di Nonno, CEO of the Geena Davis Institute on Gender in Media, talked about the power of representation in media.“Characters’ images and storylines in media shape our everyday lives in very profound ways. In the case of ‘The Scully Effect,’ it shows that when, in media, we have non-traditional roles for women and girls it helps them envision these pathways for themselves,” she said in a statement.
“When you look back at the 1990s, Scully was a woman who had not yet been depicted in TV, and as a result of that influenced generations of women and girls to go into the field to science. We hope that sends a message to storytellers to tell these stories because it does have a really positive impact on our society.”
Related
Starts With A Bang

Infographic: How dangerous is your daily commute?

Infographics present the latest NHTSA statistics on the likelihood of having a fatal accident while commuting to and from work.