A new report by the CDC finds that in the 2014-2015 year, the latest data on record, STDs in the US reached record highs. This is the second year in a row to see such a dramatic increase. Chlamydia, gonorrhea, and syphilis saw the largest jumps. Luckily, these are all curable. Although one strain of gonorrhea is threatening to become a “superbug,” or treatment-resistant.

Those ages 15-24 and men who have sex with men (MSM) were at highest risk. While two-thirds of chlamydia cases were among teens and 20-somethings, MSM accounted for the lion’s share of new gonorrhea and syphilis cases. So what is fueling this epic rise? There are a number of factors. A lack of proper sex education, an absence of fear surrounding HIV—which is treatable today, the rise of dating apps and hookup culture, the overall stigma surrounding STDs, and a decline in clinics and other resources on the state and local level, are all to blame.

Today, hookup culture has been fueled by many factors. We are in the wake of the Sexual Revolution. Also sheer economics is a major influence. Young people today need much more education and time to get their careers off the ground, and so must put off settling down. These factors and the ubiquity of hookup apps, such as Tinder and Grindr, have led to a social atmosphere where casual sex is normal, but talking about one’s STD status or asking a potential partner theirs, is not.

Some critics have pointed out that STD testing methods have not kept up with the technology we use to hook up in the first place. Now, a smartphone dongle or attachment is being developed that can diagnose STDs in a fast, private, and convenient way. The idea is to be able to screen a potential partner within minutes. Iván Balán, PhD announced the project at a recent HIV conference. Dr. Balán hails from the New York State Psychiatric Institute and Columbia University.

Such a device is only in the conceptual stages. One incarnation being developed is the mChip dongle. This particular gadget will be used by healthcare professionals, not individuals. It uses an oral swap to scan for multiple STDs. If successful, a personal product may be developed off of this model. 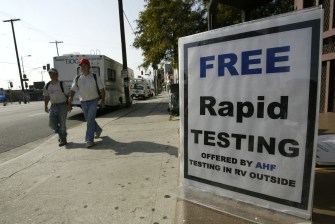 Rapid testing is available in certain places nowadays, but this app plans to put the power into the hands of users.

Balán and his team are developing a device which uses a finger prick. This places a blood sample inside the dongle to scan for HIV and syphilis antibodies. A recent study found that MSM at-risk for HIV also have a high risk of a syphilis infection. The dongle can work with power supplied by a smart phone and will deliver results within 15 minutes. Though such an option may be technologically viable, would people use it?

A 2012 pilot study found that an HIV test which was quick and easy would be adopted, by those at high risk. Here, 27 participants were asked to use OraQuick HIV test for three months. This is an over-the-counter product that can be purchased at a local pharmacy.

Participants used it with over 100 partners. Among those tested, seven were found to be HIV positive. Six of them were unaware of their status. No unprotected sex was reported among participants over the course of the study. A larger research project with 300 recruits using the same method is now ongoing. 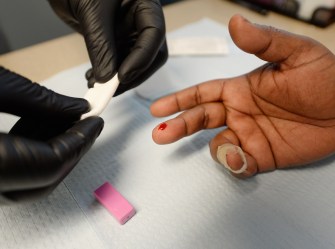 For some participants surveyed, a finger prick was an issue. But a blood sample is more reliable.

Balán queried 104 participants in that study as to whether or not they would use a smart phone test. 85% of volunteers said that they would, if it made sense and fit into their lifestyle. Respondents said they liked the fact that it tested for more than one STD. Some of the concerns they expressed included the cost of the device, how accurate it was, and security. Would someone be able to hack into it, for instance?

A test that uses a blood sample would be more reliable, according to Balán. But for some participants surveyed, a finger prick was an issue. Some people just hate to give blood, even just a drop. Experts believe that such an app will appeal to tech savvy young people as well. Medical apps are being developed at universities everywhere nowadays. Researchers at Cornell University for example, are developing one to test a person’s cholesterol level.

The smartphone STD dongle for personal use is perhaps years away. Clinical trials and FDA approval will be required before it makes it to market, Balán told MedPage Today. No word yet on how long that will take or how much it will cost the end user. In the interim, public health programs, campaigns to educate and ease the stigma, and resources to fund such actions are sorely needed to get a handle on this worrisome and growing problem.

Why are dark matter and modified gravity in such conflict?

While the web of dark matter (purple) might seem to determine cosmic structure formation on its own, the feedback from normal matter (red) can severely impact galactic scales. Image credit: […]