South Korea is much in the news thanks to the 2018 Winter Olympics in Pyeongchang. As a result, all sorts of interesting things about Korean culture are bubbling up. What is really thought-provoking this time of year is how South Koreans celebrate Valentine’s Day. Rather than celebrate a single day of romantic gestures, South Korea extends the holiday over several days and celebrates specific roles for each gender.

(Curiously, the 14th of every month in South Korea has some sort of holiday associated with it.)

Like in the United States, February 14th is celebrated as Valentine’s Day in South Korea. But in South Korea, Japan and Taiwan, only women give gifts. Traditionally, women give men chocolates as a sign of affection. And rather than be economical with their purchases, women may actually benefit by spending a lot on men. How? A month later, on March 14th, her man will reciprocate on so-called White Day when he is expected to observe the ‘Rule of Three‘ and reciprocate with a gift three-times the value of what he received in February.

That means he has to spend three times what she spent on him. And not only can he give candy, but also flowers, stuffed animals, lingerie and even jewelry. How he responds signifies what he thinks about the relationship. If he doesn’t give her a present, it means he thinks he’s above her. While if he gives a gift of equal value, rather than go to the power of three, the relationship is over.

These days, on Valentine’s Day, a woman will buy chocolate for colleagues and friends as well, but will make a distinction between courtesy chocolate and the ‘chocolate of pure love.’ If the confection is handmade (or expensive), that’s a sign. But she’ll have to wait an entire month for her reply. 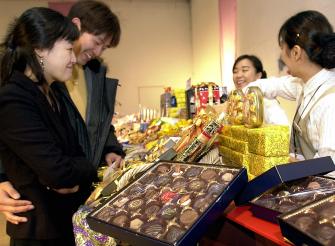 While Valentine’s Day is a Western import, White Day originated in Japan decades ago confirming that West isn’t the only part of the world to suffer from industry-generated holidays. In 1977, a Japanese confectioner named Ishimura Manseido proclaimed March 14 to be ‘Marshmallow Day’. While that didn’t exactly catch on, the National Confectionery Industry Association gave it a twist. They offered White Day and it stuck, offering men a chance to ‘reply’ to the gifts given on February 14th. The white symbolizes the purity of love but is also associated with sugar.

Another important aspect of White Day is the imperative to interweave the color white into gifts as much as possible. That could mean giving white chocolate or wrapping presents in fancy white packaging. The more the color white is used, the better. In a region which finds it difficult to talk about feelings, such expressions say a lot. And of course, there’s an element of keeping up with the next couple. Knowing this, retailers frequently advocate for both genders to give gifts on both days.

In case somebody doesn’t receive a gift on Valentine’s Day or on White Day, South Korea has a solution to bruised hearts. Called Black Day, singles get together with their single friends, go out to a Chinese-Korean restaurant and eat a steaming pile of black noodles (자장면 jajangmyeon). It’s basically Chinese noodles in a black bean-paste sauce. It’s extremely tasty. Although it’s called Chinese food, black noodles are solely found in Chinese-Korean establishments, just as egg rolls, chop suey, and General Tso’s Chicken are only found in American ones. 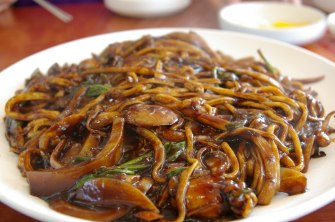 Originally, Black Day was a time for singles to get together and cry in their favorite comfort food. There’s a lot of pressure on 20-somethings to get married and have children. So Koreans feel sad not merely for being single but because they haven’t fulfilled their social obligation, which is really important in East Asian cultures. Some go as far as wearing black on that day, and some women even wear black nail polish.

But something has happened, at least in South Korea, in recent years. To a small but growing minority, Black Day isn’t a lamentation but a celebration of singlehood, of recognizing and appreciating the self, and for some women, the chance to follow a career path rather than the traditional one of domestication.

Today, South Korea remains a very traditional Confucian culture colliding with modernity. Their society is trying hard to navigate new technologies, economies, and the dissolution of tradition. In many households in and around Seoul today, both parents work, people go to college longer and work long hours in order to establish themselves.

So the traditional social pressures don’t rightly fit and are harder to square with this new paradigm. Like their counterparts in the West, many South Koreans are sick of the commercialism and forced schmaltziness of these holidays. So in a way, Black Day is a way for singles to take time with friends, suck down a healthy helping of carbs, and decide what singleness actually means for them.

Researchers find how to add more “love hormone” to your relationships

A study looks at the chemistry of couples engaged in different activities.
The Past

Who was Saint Valentine? And why was he beheaded?

Valentine’s Day has a surprisingly raunchy history, going back thousands of years.
Health

Where does Valentine’s Day come from? Let us introduce you to the festival of Lupercalia, a festival when naked young men and women ran around whipping one another with animal hides.
Up Next
Culture & Religion

Are action films snubbed at the Oscars?

Are there really no good action and adventure films anymore, or is there an inherent bias toward them?