Is there any other modern figure as simultaneously influential and discarded as Sigmund Freud? The father of psychoanalysis poked his nose into every dark corner of the human mind and made modernity follow him into the shadows, but we’ve pulled back ever since by mischaracterizing him as a sex-obsessed, cocaine-dependent, time- and culturally limited thinker with nothing to offer us today but an hour on a couch and the dredging up of Daddy and/or Mommy issues. Novelist Richard Appignanesiand illustrator Oscar Zarate aim to cure that misdiagnosis with the graphic novel Hysteria, an in-depth, imaginative reopening of the book on Freud that will surprise you with its power to convey Freud’s continued relevance for us today. 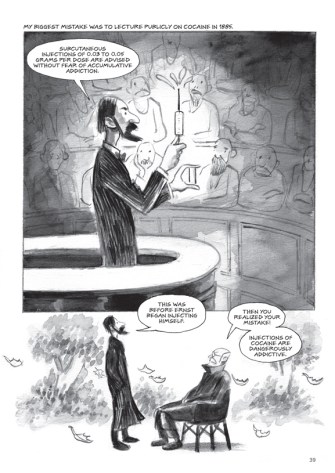 Appignanesiand Zarate teamed up previously to give Freud the graphic novel treatment in Freud for Beginners and Introducing Freud, but Hysteria takes those introductions to another level by focusing primarily on Freud’s collaboration with Josef Breuer in Vienna on specific cases of hysteria, including landmark cases such as Anna O. and Elisabeth von R., both of which helped Freud arrive at the “talking cure” of classic, Freudian psychoanalysis. Before presenting the paradigm-shifting, heroic Freud, however, Appignanesiand Zarate give us the less-than-heroic, trial-by-error Freud who championed cocaine as a wonder cure (shown above), only to realize too late (for his patients and himself) its addictive properties. Poverty, self-doubt, and the trials of being Jewish in a less-accepting world all help Hysteria paint a different, more human portrait of Freud. 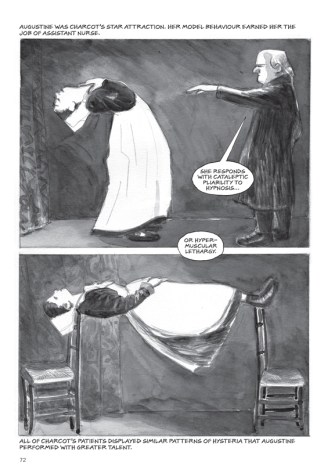 The graphic novelists early on dispel one of the biggest Freudian myths — that of the lone genius. Instead, they give credit to French neurologist Jean-Martin Charcot’s study of hysteria in poor women at The Pitié-Salpêtrière Hospital, where Freud went to study under and work with Charcot. Charcot wondered at the physical manifestations (shown above) cases of hysteria could take. Charcot believed hysteria to be a physical problem, probably a neurological disorder and, perhaps, hereditary. The very term “hysteria” (from the Greek word for uterus) reflects how the problem was once considered not just physical, but related to the “frail” female body.

Charcot’s overshadowed by Freud’s fame today, but it’s important to know hysteria’s sexist roots and how Freud’s shift to searching for psychological rather than physical causes made him less sexist. Appignanesiand Zarate counter the sexism critique of Freud by suggesting his discovery of several male hysterics, including himself. “I’m a mess of ills,” Freud says in Hysteria. “Brachial neuritis, nasal catarrhs, throat angina, migraines, constipation … Bleh!” As novelist and playwright Deborah Levy points out in her foreword to Hysteria, “Hysteria is the language of the protesting body.” Whether that body is male or female is irrelevant. In fact, Levy argues for Freud’s proto-feminism, writing that whereas Charcot observed but didn’t listen to his female patients, “Freud encouraged his patients to speak freely and without censorship. This was no small matter considering how callously women had been silenced by the societal restrictions of their day and not least by their families, many of whom were sexual predators.” Freud gave these women back their voice in a time when they were virtually voiceless. 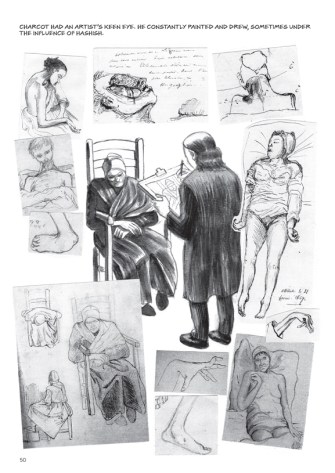 While Appignanesiwonderfully gives these women their words back as well in his text, Zarate excels in conveying visually the turmoil of hysteria. Charcot himself sketched the more extreme symptoms of hysteria (shown above) — again, watching more than listening — so Zarate peeks over his shoulder to recreate that dynamic while also questioning the power relationship behind it of active viewer and passive, powerless object. Later, Zarate turns Charcot into a ghost following Freud to Vienna not only to haunt Freud, but also to provide a mind in dialogue with Freud’s. Similarly, Zarate masterfully illustrates the swirling chaos of emotional trauma with evocative images that would play poorly on a film screen, but take full advantage of the graphic novel’s ability to marry words and pictures into something bigger and more boldly meaningful. 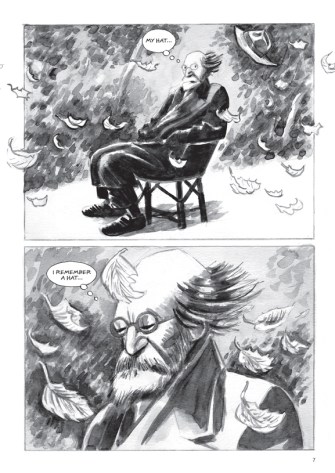 Appignanesiand Zarate tell the story of Hysteria in flashback by framing it around Freud’s exile in London after escaping the Nazis in 1938. “I’m surrounded by mass hysteria!” the elder Freud complains as his family pressures him to leave Austria (where the Nazis were already burning his books) while he still can. Zarate depicts the Nazis that hound Freud’s family as identical, Hitler-faced, wind-up toy soldiers — a surreal, Maus-like touch that perfectly captures the mass hysteria of fascism. In doing so, the graphic novelists burst Freud’s findings out of their stereotyped Viennese, female, fin de siècle bubble and make them relevant to the days of Nazi Germany and, perhaps, our own.

“[T]here is no doubt that personal and political conflicts, and above all rage and hopelessness, continue to speak through the body of our own turbulent century,” Levy writes about our 21st century. “Hysteria is not about ‘them’; it is about all of us.” Appignanesiand Zarate fast-forward the end of Hysteria to today and imagine Freud walking amongst us, diagnosing our ills. Professionals refrain from the term “hysteria” today for all the anti-feminist baggage it carries, but perhaps we should resurrect it, or at least Freud’s conception of it as something to be solved with words rather than violence to others or self.

Their Freud looks around at today’s pharmacological wonderland and realizes we haven’t learned the lessons of his cocaine misadventure. The authors condemn not only conventional drugs, but also less recognizable drugs such as social media. Similarly, we haven’t learned the lessons of the totalitarianism that drove him into exile. What are today’s mass movements such as religious fundamentalism, extreme terrorism, extreme anti-terrorism, and cults of personality (see Trump, Donald) but physical manifestations of the emotional pain Freud longed to diagnose and treat? “What are you looking at?” someone asks a dreaming Freud at the end of Appignanesiand Zarate’s Hysteria. “I’ve seen the future,” Freud answers. “And it needs me.” Maybe it’s time to reopen the book on Freud and look closer at his ideas to look closer at ourselves. And maybe that book is Hysteria.

Here’s what the weather phenomenon baking large parts of the country actually means.
Up Next
Strange Maps

Pretty soon, these maps may be as dated as the Bing Crosby song