Dogs and cats are carnivores. And today, we tend to think of most pet food as wanting in real nutrition and chock-full of fillers, which aren’t good for pets. Any loving pet owner knows how important the right diet is. As a result, there’s a trend of feeding such pets a raw-meat-based diet (RMBD). The idea is that this is closer to what they would eat in the wild. Some even claim it’ll help with allergies or skin problems.

According to the Washington Post, this is the fastest growing trend among pet owners them in the US and other developed nations. The market has responded and is offering such choices at boutique and chain pet stores across the nation. But is such a diet good for your dog or cat? The results of a new study state you should not feed your pet a raw meat diet because the products associated with it are likely to carry bacteria or parasites. These findings were published in the journal Vet Record.

“The purpose of this study was to test for the presence of zoonotic bacterial and parasitic pathogens in Dutch commercial RMBDs,” researchers write. It’s thought that around half of all dog owners in the Netherlands feed their pet RMBDs. Researchers looked at 35 frozen varieties from eight different brands. They thawed them out and tested them for a slew of dangerous pathogens.

Escherichia coli (E. coli) was found on 80% of samples, and 23% had the type of E. coli that can cause kidney failure in humans. The researchers also found that 43% tested positive for listeria and 20% positive for salmonella. That’s not all. Two types of parasites were detected: 23% of samples tested positive for sarcocystis and 6% toxoplasma gondii. While the former mostly sickens farm animals, the latter can negatively affect human infants.

Toxoplasma gondii is also known to hurt cats and has been implicated in cases of mental illness among cat owners. Study authors told Time that the brands found in the Netherlands were “without a doubt similar” to those sold in the U.S. As a result, researchers say, such products should be labeled high risk. 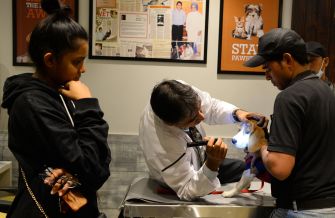 The biggest threat of such a diet may not be to your pet but to you. Credit: Getty Images.

Not only could these products get pets sick, they could affect their human owners through cross-contamination. Besides preparing food and food bowls on the counter or in the sink near dishes or utensils, a pet often licks its owner’s hands or face. What’s more, the owner has to handle the pet’s feces or things associated with it, so at many points throughout animal care, a person runs a risk of contracting a dangerous pathogen.

Freezing raw meat may neutralize parasites, but it does nothing for dangerous bacteria which can typically hibernate through that kind of imposed winter. Some of these pathogens are also present in the raw meat we buy for ourselves at supermarkets, but they are destroyed through the cooking process. Your animal isn’t getting that sautéed option.

This isn’t the only analysis to reach such conclusions. An earlier study conducted by the FDA’s Center for Veterinary Medicine (CVM) concluded with similar findings: raw-meat pet food products contains a whole host of dangerous pathogens.

Paul Overgaauw of Utrecht University led the study. He and colleagues said that not only are there high risks, there are no proven benefits to feeding your dog or cat a raw-meat-based diet. He and fellow researchers wrote in their study:

Despite the relatively low sample size of frozen products in our study, it is clear that commercial RMBDs may be contaminated with a variety of zoonotic bacterial and parasitic pathogens that may be a possible source of bacterial infections in pet animals and if transmitted pose a risk for human beings. Cats and dogs that eat raw meat diets are also more likely to become infected with antibiotic-resistant bacteria than animals on conventional diets, which could pose a serious risk to both animal health and public health.

Pets improve our lives in so many ways. That’s why they deserve greater legal protections and some say, more rights. Want to hear more about the latter and how extending animal rights improves our own? Then click here:

Scientists ranked countries on their end-of-life care. The U.S. fared poorly.
Up Next
Culture & Religion