A new movie theater in Saudi Arabia will screen Black Panther on April 18, marking the first commercial movie shown in the country since it banned cinemas 35 years ago.

The Disney blockbuster will receive a gala premiere at an AMC-branded cinema located in a financial district of the country’s capital city of Riyadh.

“It is big news with global significance,” AMC CEO Adam Aron told journalists following the announcement, adding that he thinks the new theater, which is set in a former symphony hall and has more than 500 leather seats, will be the prettiest in the world.

Saudi Arabia, an absolute monarchy with 32 million citizens, began closing its cinemas after adopting an ultraconservative interpretation of Islam in 1979. But since oil prices dropped in 2014, the country has been looking for ways to boost and diversify its economy, with a particular focus on entertainment and technology.

In 2017, the Saudi government announced it would allow AMC, the world’s largest movie theater chain, to open 40 cinemas across the country over the next five years. By 2030, the country hopes to open about 350 cinemas that could earn an annual $1 billion at box offices and create 30,000 permanent jobs. 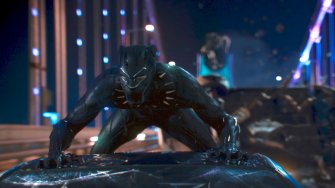 The reopening of cinemas in Saudi Arabia is part of broader liberalization movement that’s gained momentum since 32-year-old Mohammed bin Salman was named crown prince in 2017. Over the past year, Saudi Arabia has relaxed restrictions on public concerts, lifted the ban on women driving, curbed the power of clerics, and launched an anti-corruption campaign that’s resulted in the arrest of scores of officials and business elites.

Still, Saudi Arabia’s social norms and policy remain ultraconservative. The tickets to a recent public concert, which was segregated by gender, warned that “Dancing is strictly prohibited” – as was “swaying.” And earlier this year, the country’s highest-ranking religious official, Abdulaziz Al Sheikh, publicly opposed the restoration of cinemas, suggesting the “depravity” of commercial movies would corrupt morals in the country.

He might not need to worry: Saudi Arabia’s Ministry of Culture has promised movies will be censored to fall “in line with values and principles in place and do not contradict with Sharia Laws and moral values in the Kingdom.”

Related
13.8
The weirdness of quantum mechanics forces scientists to confront philosophy
Though quantum mechanics is an incredibly successful theory, nobody knows what it means. Scientists now must confront its philosophical implications.
Neuropsych
Why is a Starbucks loyalty rewards program making customers so angry?
The rewards price to get a free cup of hot coffee at Starbucks is going up.
Empowering growth
7 essential management training topics for every team leader
From emotional intelligence to problem solving, these management training topics will set team leaders up for success.
Thinking
What if you could rewire your brain to conquer suffering? Buddhism says you can
For Buddhists, the “Four Noble Truths” offer a path to lasting happiness.
Hard Science
Solved: 500-year-old mystery about bubbles that puzzled Leonardo da Vinci
The solution involves the infamous Navier-Stokes equations, which are so difficult, there is a $1-million prize for solving them.
Up Next
Surprising Science
Large crack in East African Rift is evidence of continent splitting in two
A large crack, stretching several kilometres, made a sudden appearance recently in south-western Kenya.