There was no large-scale “war on drugs” in the United States until the 1930s, when a man named Harry J. Anslinger was chosen by Herbert Hoover’s Treasury Department head Andrew W. Mellon to become the head of the new Federal Bureau of Narcotics. Eventually to be merged into the Drug Enforcement Administration in the 1970s, its goal was the eradication of hard drugs such as heroin and cocaine, but also, cannabis.

According to author Martin Booth in Cannabis: A History, it was Anslinger who popularized the word “marihuana” (also “marijuana”), to associate it with Hispanics and therefore, make it less desirable to white people. He got his wish, and cannabis/marijuana was made illegal in 1937 with the Marihuana Tax Act, just a few years after alcohol was removed from prohibition.

Ever since, people have been fined, arrested, imprisoned, and more for growing, selling, and using cannabis.

Now 20 states have made it medically legal and nine recreationally legal. As this has slowly evolved across our culture, the laws have been relaxed and some repealed. Despite efforts by some politicians currently in power to reverse that trend, it’s still moving forward; there are no less than eight states due to approve some sort of legal usage in November 2018, or change from medical to legal recreational use. 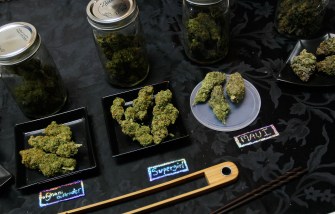 Colorado, one of 14 states to allow use of medical marijuana, has experienced an explosion in marijuana dispensaries, trade shows and related businesses in the last year as marijuana use becomes more mainstream. (Photo by Chris Hondros/Getty Images)

The prohibition of the plant and its various uses is coming to an end; with billions at stake in tax revenue and business income, states like Colorado, Washington, and California are on the leading edge of reform for laws and penalties related to cannabis.

It makes sense, then, that San Francisco, one of the most forward-thinking cities in the country, has taken a dramatic step in this process. The city will dismiss and expunge the records of thousands of convictions related to cannabis, going back to 1975.

At a news conference, District Attorney George Gascon summed it up: “We want to address the wrongs that were caused by the failures of the war on drugs for many years in this country and begin to fix some of the harm that was done not only to the entire nation but specifically to communities of color.”

Using the same law legalizing recreational marijuana that went into effect in November 2016, San Francisco will also look at felony convictions related to cannabis, and will reverse some of those as well, on a case-by-case basis.

The California law that allows this to work took effect in November 2016, but until now someone who wanted their record removed would have to hire a lawyer, petition the court, and work through the process in a costly and time-consuming manner.

Starting with this announcement, many records will be automatically expunged—a positive for low-income folks who have such things on their record and can’t afford to get them removed.

“I feel that this is a giant step toward justice,” said NAACP representative Amos Brown at the press conference.

First, San Francisco, next… the entire state, and maybe more to follow?

Related
Life
Scientists use CRISPR to insert an alligator gene into a catfish
Disease kills off 40% of farmed catfish. This gene protects them.
Neuropsych
How you breathe affects your brain
Your breathing rhythm influences a wide range of behaviors, cognition, and emotion.
Health
What happens when regular porn watchers abstain for a week?
Researchers watched for signs of withdrawal — but didn’t find any.
Neuropsych
Daily caffeine intake temporarily alters your brain structure
Compared to people who took a placebo, the brains of those who took caffeine pills had a temporarily smaller gray matter volume.
Thinking
Why you should laugh at yourself, according to Seneca and Nietzsche
“It is more human to laugh at life than to lament it.”
Up Next
Thinking
10 logical mistakes you make every day — and what to do instead
Do you ever act irrationally? You probably have. Let’s take a look at how to fix that.