Hollingsworth v. Perry and United States v. Windsor will be the most divisive and closely watched cases of the term, and will produce two of the most significant rulings of the past few years. It has the potential to cement or curtail a growing national movement to open the institution of marriage to same-sex couples.

There are a host of complex questions to be batted about over the standard of review the court will use to adjudicate the cases and how the justices will interpret and apply previous relevant decisions — none of which is directly apposite to marriage equality. I’ll address these and other matters in future posts.

For now, a quick note about how public opinion may impact the justices’ deliberations. Legal scholars disagree about the relationship between Supreme Court decisions and the public mood; some argue that the Court often opposes public opinion in its rulings while others find that the views of the people have a strong influence on the Court’s decisions. In his 2009 book, The Will of the People: How Public Opinion Has Influenced the Supreme Court, Barry Friedman claims that “the more salient Supreme Court decisions generally meet with great public approval.”

If the latter view is correct, supporters of marriage equality may have cause for limited optimism. Consider how dramatically public opinion has evolved over the past 15 years:

Compare these numbers to the state of public opinion on interracial marriage when the Supreme Court overturned a Maryland anti-miscegenation law in 1967: 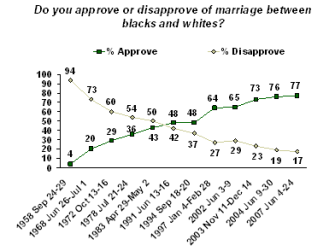 The contrast is stunning: only 20 percent of Americans approved of marriages between blacks and whites in 1968, a year after Loving v. Virginia was decided, whereas 54 percent of Americans support the right of gays to marry today. If the Court votes to uphold DOMA or reverse the California Supreme Court’s ruling in favor of same-sex marriage, it will fly in the face of a new national consensus about the rights of gays and lesbians.

Researchers compared art from three time periods and found that modern artists got — and are still getting — animal gaits wrong far more often than expected.