We’ve talked before about the rising number of non-religious people in the United States and around the world. While a lot of the discussion focuses on issues of death, morality, and existential dread, there are more mundane issues that come along with demographic shifts. Chief among such matters are the changes that result when one of the most popular activities for people to do once a week is abandoned.

For many people, their place of worship is not only a gathering for religious affairs but also for social ones. Between the chance to talk to the neighbors, social activities, and after-church coffee, religion can offer us community alongside spirituality. Even if the idea of fewer people going to church doesn’t strike you as a bad thing, decreased social engagement as a result of it can still be a bother.

Are there social consequences when people stop going to church?

In his book Bowling Alone, Robert Putnam examined the effects of decreased social engagement across American society. Among the statistics he considered was a decline in church attendance and the impact it has on our social capital and society at large.

For those who don’t know, social capital is academically defined as a “collective resource that exists in social relationships which can be used towards a variety of individual and collective goals.” More practically, social capital is a way of viewing connections, friendships, and involvement in organizations that allow for group action as an aggregate. Our level of engagement directly influences the amount we have and more is almost objectively better.

While his book, written before the recent surge in the number of non-religious people, examined the effects of fewer people being engaged in civic organizations of all kinds, his chapter on the decline in religious participation is of interest to us here. He notes that people who are church members have higher levels of civic engagement than non-members. He rattles off some statistics on the subject with an eye towards the benefits of institutions.

He also notes that: 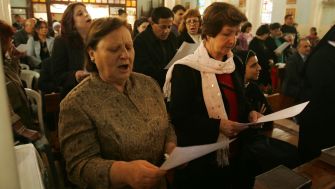 Worshippers at Sunday Mass. It makes sense that people who spend a great deal of time together each week would get to know one another and that they might have more social capital than people who don’t do a comparable activity. (Getty Images)
In addition to these indicators of engagement, he also notes that the typical churchgoer knows and interacts with more people on a more regular basis, a key component of social capital.

He posits that regular churchgoers benefit from the institution of religion in having access to more social capital than non-members. While he says nothing about the benefits of being religious, he does point out the benefits that being an active member of a religious organization can bring to both the individual and their community.

More recent studies have endorsed his claims, although they suggest that non-religious persons are starting to catch up to their faithful peers in terms of social capital. However, the entire area of “religious social capital” is still out of reach for non-believers, limiting not only how much they can get, but who they can accumulate it with. 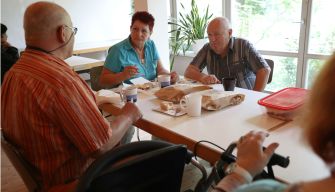 Pensioners enjoying coffee. The social aspect of religion is one that is often overlooked in discussions about the rise of atheism. While it is possible to have community without religion, one cannot deny the importance that it has in the production of social capital. (Getty Images)

Is this just because of more atheists?

Don’t go around blaming atheists for the fall of civilization.

It is important to mention that even the religious are going to church less often than in years past. This phenomenon has been going on for decades, as successive generations have been less religious than their parents. Non-religious people aren’t the only ones responsible for the decline in church attendance. It seems like getting up early on Sunday is difficult for everyone.

Is there any quick fix other than an inquisition?

There is no fundamental reason why the rising number of non-religious Americans couldn’t be engaged in something else. The hours that would otherwise have been spent in church could as easily be spent elsewhere. For example, this author is an atheist who is involved in several social groups, just not religious ones.

While this secular engagement has yet to materialize on a scale large enough to replace organized religion, it may merely be a matter of time. There are, for instance, humanist centers in many major cities that offer the same social connections, community, and weekly services as religious organizations. The problem is getting people to go. Even prisons are recognizing humanism as a faith group, allowing inmates outside of organized religion to meet and discuss their values.

As old connections and social institutions fade away, new ones arise. Many people today play video games socially, creating new relationships that were impossible to imagine in the middle of the 20th century. Just because religious centers have been bedrocks of American social life for the last 200 years doesn’t mean they will, or must, remain so. Their decline does not necessitate the end of a functioning society.

As time goes on and demographics and tastes change, the activities and institutions which drew people together in days gone by no longer have the same power in the modern world. While the morality of those changes is another subject, the social cost is one that can be measured. Will the new atheists rise to the challenge of providing the community that religion once provided? Or are we doomed to social decay and fragmentation?

You could be your own twin

Human chimerism seems to be a rare condition where twins swap DNA, but it may be more common than you think.