Mitt Romney addresses the nation at the Republican National Convention on Thursday night. How well have his warm-up acts set the stage for his big speech?

I’ll assess the four marquee speeches delivered on Tuesday and Wednesday during prime time. Grades are based on eloquence, argumentative strength and potential to persuade undecided voters. 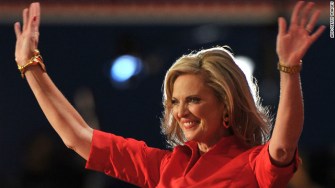 Some people loved this speech, and the convention delegates seemed to eat it up, but to my ears the nominee’s wife was a big disappointment. Mrs. Romney began by promising she would avoid politics and “talk to you about love.” It’s sweet that Mitt took Ann home safely from a school dance. But this isn’t very appealing as a deal-closer for undecided voters who have bigger concerns. If you didn’t gag at the outset, Mrs. Romney gave you a few more opportunities. In laboring to humanize her husband to a national audience and establish a rapport with average Americans who feel Mitt doesn’t understand their lives, she only succeeded in accentuating the gap between her fortune and the plight of struggling middle class:

And I have seen and heard stories of how hard it is to get ahead now. You know what?  I have heard your voices. They have said to me, I am running in place and we just cannot get ahead. Sometimes, I think that, late at night, if we were all silent for just a few moments and listened carefully, we could hear a collective sigh from the moms and dads across America who made it through another day, and know that they will make it through another one tomorrow. But in the end of that day moment, they are just aren’t sure how.

Ann feels our pain. And she felt it herself early in her marriage to Mitt, when she slummed it in a “basement apartment” munching “pasta and tuna fish” while her husband, son of a governor and CEO, was attending Harvard Business School and Harvard Law School.

Much has been made of the inconsistency between Ann Romney’s mushy love talk and Chris Christie’s Machiavellian declaration that we must “choose respect over love.” But Mrs. Romney contradicted the GOP’s main message of the evening —we built it! — all by herself. In a speech in which she praised her man’s self-made success and highlighted the principle of self-reliance, she referred to the duty mothers have to do their kids’ homework:

You are the ones that have to do a little bit more and you know what it is like to earn a little bit harder earn the respect you deserve at work and then you come home to help with the book report just because it has to be done.

Let the kid write his own damn book report. 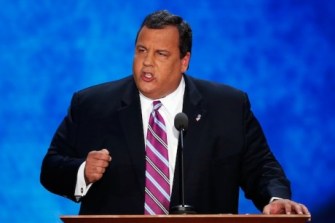 I had a hard time focusing on Christie’s speech, mesmerized as I was by the dizzying skyscape swirling around him in the background. I did catch this, which gave me pause:

We believe in telling hardworking families the truth about our country’s fiscal realities, telling them what they already know, the math of federal spending does not add up. With $5 trillion in debt added over the last four years, we have no other option but to make the hard choices, cut federal spending and fundamentally reduce the size of this government.

There is a lot of pandering about the budget in both parties, but Christie is right that the Democrats are behind the Republicans in terms of their willingness to paint the bleak picture of the United States’ fiscal future. The trouble is that the GOP plan is based on the untenable premise that massive tax cuts for the wealthy will somehow close the deficit and reduce the nation’s trillions of dollars in debt. The diagnosis is sober; the GOP cure is disingenuous. 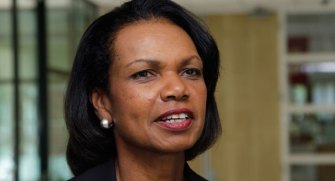 Secretary Rice delivered the speech with the greatest crossover appeal of the convention. I found myself stirred by it. In an address that focused on foreign policy, Rice spent time discussing the “crisis in K-12 education” and its implications for the future of American strength. Unless we confront the crisis with a renewed commitment to public education, she warned,

Rice spoke without the weight of ideology. She was fair. She communicated a love for country rather than a slavish adherence to party. Her personal story at the end sang in a way that Ann Romney’s tuna fish anecdote did not:

And on a personal note — a little girl grows up in Jim Crow Birmingham — the most segregated big city in America — her parents can’t take her to a movie theater or a restaurant — but they make her believe that even though she can’t have a hamburger at the Woolworth’s lunch counter — she can be President of the United States and she becomes the Secretary of State.

Despite all these virtues, I waited in vain for a discussion of the wars in Iraq and Afghanistan Rice helped shepherd during her time in the White House. This omission costs her a few points on my rubric. 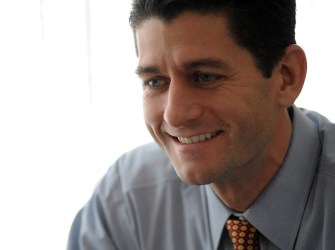 The 42-year-old congressman from Wisconsin strode on stage with youthful swagger on Wednesday night. Ryan deceived the audience with cynical charges against Obama. He threw out a few flat-out lies, including the charge that Obama had failed to prevent the closing of a factory in Janesville, Wisconsin when in fact the factory was shuttered while George W. Bush was president. He mocked his running mate — a little too excitedly — by likening Romney’s iPod playlist to Muzak.

But Ryan spoke reassuringly to fellow Catholics and evangelicals who might be uncomfortable with Romney’s Mormonism: “The man who will accept your nomination tomorrow is prayerful and faithful and honorable.” He colorfully alluded to twentysomethings who resist growing up: “College graduates should not have to live out their 20s in their childhood bedrooms, staring up at fading Obama posters and wondering when they can move out and get going with life.” He hammered away at President Obama by reversing the air of 2008, turning “change” into empty promises, “hope” into fear, “new” into yesterday’s news.

The speech rose to an impressive crescendo at the end. It was rousing, infuriating, frightening. Ryan looked straight in the camera and deflected the biggest worry people have about his budget plan: “Medicare is a promise, and we will honor it. A Romney-Ryan administration will protect and strengthen Medicare, for my mom’s generation, for my generation, and for my kids and yours.”

Though packed with deception, it was fantastic. I tremble as I record the grade.

I’m cheered by one thought. Tomorrow night, there is no way Mitt Romney will match the clarity, the eloquence or the mendacity of his running mate.

The aging brain is networked differently.
Up Next

The announcement of a prize challenge for renewable energy machine development is a small but shining carrot for the industry. Meanwhile, residents on Scotland’s Orkney Islands are leading the way in energy self-sufficiency.