Strong psychological reactions — call it the yuck factor — are preventing innovative ideas from maturing, like purifying wastewater for drinking, or using insect protein to fortifying flour for populations in need.

Despite Bill Gates’ media tour, where he publicly drank purified wastewater in front of cameras and with celebrities, our repulsion from the idea of chugging down so-called poop water runs deep. 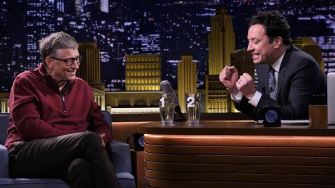 Maria Konnikova examines at The New Yorker, when individuals were asked if they would ever drink purified water that originated as human waste, their responses suggested that no amount of scientific evidence could overcome their hesitancy:

“Twenty-six percent of participants were so disgusted by the idea of toilet-to-tap that they even agreed with the statement, ‘It is impossible for recycled water to be treated to a high enough quality that I would want to use it.’ They didn’t care what the safety data said. Their guts told them that the water would never be drinkable.”

The reason we react so forcefully against drinking water purified from waste, or eating flour fortified with insects, which Konnikova also discusses, has to do with a psychological phenomenon known as “contagion.”

It is best exemplified by the thought experiment called Hitler’s Sweater. Simply put, would you wear a sweater you knew belonged to Hitler? Most people wouldn’t, even though it’s just thread. It seems we have a deep feeling that the essence of an object stays with it even though the object itself is completely transformed or placed in a different context.

Implementing innovative technology that transgresses cultural boundaries could improve or save the lives of millions, but psychologists may have to persuade us to accept some stomach-churning measures.

Gates is promoting a machine called the Omniprocessor that can purify a glass of water from sewage in about five minutes. Still, hesitancy is grounded strongly in biological and cultural traditions.

That, of course, is at odds with established evidence that clearly shows wastewater can be purified to levels that are cleaner than tap water. Jeffrey Fulgham, chief sustainability officer at GE Power & Water, explains in his Big Think interview:

“The beauty of wastewater reuse is we can actually purify that wastewater way beyond the quality needed for drinking water. And in fact, it’s a nice, consistent, high-quality water. You know, people don’t have much issue with desalination, to be able to take seawater and make drinking water and actually wastewater is much easier to treat than seawater.”

In the perilous mountains of Tibet, archaeologists unearthed ancient hand and footprints that seem to be the creative work of children.
Up Next
Politics & Current Affairs

Just How Islamic Is ISIS?

Far from using Islam as a mere facade for bloodlust the Islamic State’s interpretations of Koranic teachings are fundamental to its mission.