Software designed for university professors to detect pay-for-paper schemes, where students purchase their writings from the web (or simply copy them), as well as good old-fashioned diligence and research, has led to one conclusion: Shakespeare borrowed several of his themes and ideas from one of his contemporaries. Or, at least…was inspired by reading some of his words.

In the new book, authors Dennis McCarthy and June Schlueter establish the links between The Bard and a man named George North, who wrote an unpublished manuscript titled, “A Brief Discourse Of Rebellion And Rebels.”

A self-taught Shakespeare scholar, McCarthy told the New York Times, “It’s a source that he keeps coming back to. It affects the language, it shapes the scenes and it, to a certain extent, really even influences the philosophy of the plays.”

It might not have even been blatant or intentional; much like music that’s highly influential in a given culture, the concepts were simply embedded into Shakespeare’s subconscious mind and lay dormant until he wrote something new. 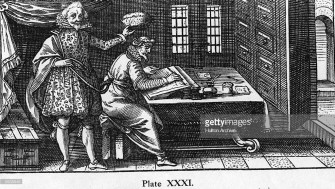 English dramatist William Shakespeare (1564 – 1616) lifting a cap, the symbol of fame, off the head of Bacon, circa 1610. (Photo by Hulton Archive/Getty Images)

Using open-source plagiarism software, “WCopyfind,” McCarthy found that there were phrases in parts of North’s writing that included the same words in the same order as Shakespeare later used. Words such as ‘proportion,’ ‘glass,’ ‘feature,’ ‘fair,’ deformed,’ ‘world’ and ‘shadow’ are used in the opening soliloquy of Shakespeare’s “Richard III”. They’re also found in North’s manuscript.

“People don’t realize how rare these words actually are. And he keeps hitting word after word. It’s like a lottery ticket. It’s easy to get one number out of six, but not to get every number.” asserted McCarthy.

To be clear, the authors aren’t accusing Shakespeare of plagiarism. The point is simply that, like all good artists, he combined ideas from many different sources to create his own worlds.

Which is kinda what we all do, isn’t it?

Related
Starts With A Bang
Ask Ethan: What are white holes, and do they really exist?
In General Relativity, white holes are just as mathematically plausible as black holes. Black holes are real; what about white holes?
Life
Strange life forms create an “alien” ecosystem in an abandoned uranium mine
Slimy biofilms made up of bacterial and eukaryotic life forms have taken over an abandoned, flooded uranium mine in Germany.
Hard Science
Earth has an eerie “sodium glow,” and astronomers use it to image stars
Air currents in our atmosphere limit the resolving power of giant telescopes, but computers and artificial stars can sharpen the blur.
Health
How saliva changes the flavor of food
“It’s a liquid, but it’s not just a liquid.”
High Culture
Why are flood myths so common in stories from ancient cultures around the world?
Could the prevalence of flood myths around the world tell us something about early human migration or even the way our brains work?
Up Next
Politics & Current Affairs
Why North Korea has already won the Winter Olympics
The Olympic Games are the perfect backdrop for international propaganda.