In a #MeToo-inspired rebranding effort, Miss America is ditching its swimsuit competition to focus more on contestants’ personalities.

The event is now a competition, no longer a pageant, Gretchen Carlson, chair of the Miss America board of directors, said on Good Morning America.

“We will no longer judge our candidates on their outward physical appearance. That’s huge,” she said, adding that the competition will be more inclusive of women of “all shapes and sizes.”

In place of the swimsuit competition, contestants in September’s edition of Miss America will be asked to display their passion, smarts, and knowledge of Miss America’s broader social responsibilities in front of a panel of judges. Each contestant will also tell judges how she plans to develop her unique ‘social impact initiative’.

Carlson, who was crowned Miss America in 1989, said she’s been approached by many women who’ve wanted to participate in the event but didn’t want to strut across a stage in high heels and a swimsuit.

“We’re interested in what makes you you,” she said.

The revamped Miss America will also nix its evening gown segment and instead encourage women to wear whatever they want.

“We want more women to know they are welcome in this organization,” Carlson said after noting that Miss America is primarily a scholarship program whose alumni include lawyers, doctors, and members of Congress. 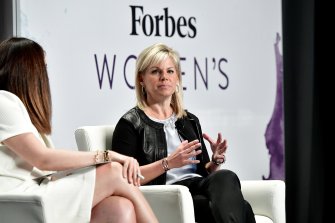 The announcement marks a timely and fundamental transformation for the event, which is now run by an all-female board.

“We’re experiencing a cultural revolution in our country with women finding the courage to stand up and have their voices heard on many issues,” Carlson said in a statement. “Miss America is proud to evolve as an organization and join this empowerment movement.”

Carlson, a former cable-news anchor, made headlines in 2016 after settling a sexual harassment lawsuit against Fox News chairman Roger Ailes. She’s since become a vocal supporter of the #MeToo movement and has also hosted and supported the Miss You Can Do It Pageant, an event designed for girls with special needs.

Miss America’s transformation is timely not only because of #MeToo, but also because the event has been generally losing viewers for the past few years, down to 5.6 million in 2017 from 8.6 million in 2013. It’s possible the rebranding will earn new fans who appreciate the move away from objectifying women. 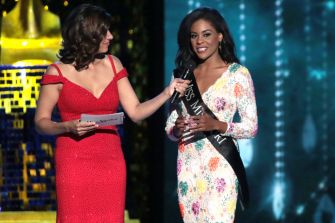 The swimsuit challenge will be replaced by a Q&A panel. (Photo by Donald Kravitz/Getty Images for Dick Clark Productions)

It’s also possible the changes will render the event too unfocused to attract a wide TV audience. After all, the 97-year-old event began as a swimsuit pageant. That’s straightforward. But the aim of Miss America is now more ambiguous, something that’s evident in the event’s few vague requirements, which state that each contestant must be: a woman, a U.S. citizen, single and never married, and “of good moral character.”

When asked about how the change will affect TV ratings, Carlson said she’s not worried about losing now that the program won’t feature scantily clad women, adding that the talent segment actually receives higher ratings.

“This is a new beginning, and change can sometimes be difficult,” Carlson said. “But I know a lot about change. My life has worked in mysterious ways.”

The next Miss America will take place September 9, 2018 at Boardwalk Hall in Atlantic City.

Related
Neuropsych
Psychology studies that go viral are likelier to be bogus
A new 20-year analysis of over 14,000 psychology studies finds that a study’s media coverage is negatively linked to its replicability.
The Future
How a device transmits radio waves with almost no power
Apart from the energy needed to flip the switch, no other energy is needed to transmit the information.
The Present
Radical idea: Redraw the U.S. map as a nation of city-states
While cities drive national economic growth, their political geography means they cannot effectively deal with inequality, poverty, and other socioeconomic problems.
The Learning Curve
Why do high IQ people stagnate in their careers? Emotional intelligence
Research suggests that emotional intelligence is more vital for success than IQ.
The Present
Even in the age of AI, some problems are just too difficult for computers
Computers are growing more powerful and more capable, but everything has limits
Up Next
Culture & Religion
At current birth rates, the Japanese population will disappear by 2500
At this rate, the country of Japan will have zero population in the year 2500.