Hitler’s charisma, demagoguery, and ability to mobilize Germany behind him have been much written about and discussed. His failed attempt to fight a war on two fronts, and making the same mistake as Napoleon—invading Russia, have also been topics exhausted by scholars and armchair historians alike. But new revelations, such as the fact that the Fuhrer had a micropenis, are changing completely how we view the Second World War.

A 47-page dossier reveals that the rise of Nazi Germany was fueled by drug use. Hitler himself was taking 74 separate drugs, including a powerful opioid, and what we would consider today methamphetamine (crystal meth). The US military report, developed over the course of the war, outlines a number of different substances ingested by the Fuhrer including morphine, barbiturates, tranquilizers, and even bull’s semen.

The bull’s semen was supposed to restore the Fuhrer’s libido in to keep up with his much younger girlfriend, and to make him appear energetic and masculine before the populace. The other drugs were to help alleviate a range of issues from stomach cramps to perhaps, what some historians believe were the symptoms of bipolar disorder.

German writer Norman Ohler covers drug use in Nazi Germany in his new book, The Total Rush (Der Totale Rausch). In America, its entitled Blitzed. The book was a huge success in Germany and has since been translated into 18 languages. According to Ohler, though drugs played a pivotal role, historians overlooked it due to little interest in Hitler’s personal physician, Dr. Theodor Morell. 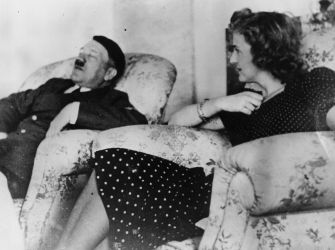 Ohler’s friend Alexander Kramer, who owns a vast collection of books and memorabilia from the war period and earlier, was the first to tell Ohler about the role narcotics played. Ohler said he knew immediately it would be the subject of his next book. Though he is not an historian, Third Reich expert Hans Mommsen, now deceased, aided the author in his quest. Ohler spent years in archives to piece the story together.

It all begins during the Weimar Republic, and the rise of Hitler. His inner circle lionized him, portraying him as a superior man in mind and body, who never ate meat, never touched drugs or alcohol, or even women. In 1933 when he rose to power, all intoxicating drugs were banned. Addicts were soon executed by the state or sent off to the camps.

Dr. Fritz Hauschild in Berlin developed what was first known in Germany as methyl-amphetamine. In 1937 the company he worked for expressed the hopes of using it to become a rival of Coca Cola. By 1938, the drug became pervasive and available without a prescription. Soon, almost everyone in Germany was using the drug, known as Pervitin, to boost confidence, energy, and attitude.

As ubiquitously as coffee today, it was regarded in much the same way. Housewives ate Pervitin-laced chocolates which allow them to get housework done in a jiffy and even helped them lose weight. Though health and fitness were upheld as a supreme cultural value, the populace and their leader were all, in actuality, smashed on drugs. 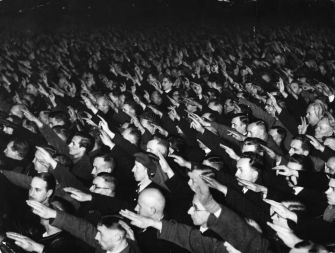 Ubiquitous drug use may have helped Hitler retain his grip on power.

It was Dr. Otto Ranke, the director of the Institute for General and Defense Physiology, who decided Pervitin was a good way to help soldiers avoid exhaustion. It allowed them to remain awake for long periods, march for miles, and fight in terrifying conditions fearlessly. Before invading France in 1940, Nazi soldiers were instructed to take tablets of Pervitin throughout the day and night. The invasion of Poland was also fueled by meth.

Although Ohler said his mentor told him never to rely on just one cause, the author says the blitzkrieg was utterly dependent on Pervitin. Otherwise, Hitler’s forces could have never swept through Europe as quickly as they did. Records indicate that 35 million tablets were distributed in 1940 over a span of four months, to fuel the western offensive. The idea was to turn ordinary men into superhuman machines.

There is still argument today over whether or not certain drugs improve or impede a soldier’s performance. The side effects of Pervitin were irrational behavior, hallucinations, and enraged outbursts. The Nazis weren’t alone. Many other armies used amphetamines to fight off fatigue. Dexedrine was used by the British and Americans, while the Japanese had their own form of speed.

As the war raged on, Hitler began relying on his doctor more and more, whom was distrusted and loathed by the rest of his inner circle. Dr. Morell meanwhile relied on the Fuhrer for his position. In 1941 Hitler came down with a terrible illness. Though Morell had been famous for vitamin injections, it was clear that these were not going to cut it. 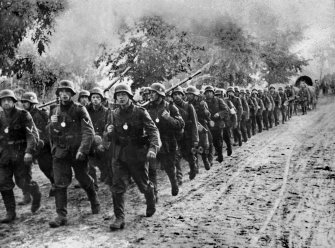 Drug use helped fuel the Blitzkrieg. But it undermined Hitler’s efforts too.

Animal hormones and a series of medications were attempted. Finally, the physician settled on Eukodal, a wonder drug which we would call Oxycodone today. Soon, one of the world’s most famous villains was receiving several injections of Eukodal per day, and combining them with a host of other drugs, including cocaine, which had been prescribed to help with an ear condition endured on the eastern front. The drug cocktail, particularly Eukodal, made Hitler feel invincible, even when it became clear, by 1944, that Germany was losing. His generals frantically appealed to him to change tactics. But Eukodal made him feel powerful, euphoric, and in control, and so he decide to plod along, undeterred.

Late in the war, the factories that made Germany’s drugs were bombed out by the Allies. By early 1945, the Fuhrer was in a state of fevered withdrawal. According to Ohler, the world’s most infamous fascist spent his final days in his bunker, drowning in a hellish state of withdrawal.

Ohler doesn’t think Hitler’s personal physician purposely turned him into an addict, though it is possible. But it’s just as likely that the Fuhrer himself was the driving force, imbued with an addictive personality. Either way, in the fall of 1944, Hitler removed Morell. But by then, it was too late. The Fuhrer took his own life. Morell meanwhile died not too long after the war a sad and broken figure, discarded by history. Ohler portrays him as a tragic figure, a mere opportunist caught up in the forces of his time, while others see him as an out-and-out scoundrel. Regardless of his intentions, his methods seem to have contributed to the downfall of the Third Reich.

Scientists ranked countries on their end-of-life care. The U.S. fared poorly.
Up Next
Hard Science