One mode of the game gives you a defined number of moves to create the highest-scoring (read: longest) sentences. Here are the gems I came up with:

Demons elevate the furniture inside him! (Probably IKEA furniture.)

Created by brother-and-sister duo Justin and Jen Helms at Playmation Studios, Sleep Furiously explores the concept that a sentence can be simultaneously grammatical, but nonsensical — the name comes from the sentence that Noam Chomsky coined to demonstrate that concept 60 years ago: “Colorless green ideas sleep furiously.” 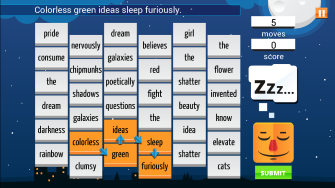 There are three modes to the game: one timed feature sure to test your ability to construct nonsensical phrases under pressure; one mode that gives you a certain number of moves to build your sentence; and an infinite mode where you can create grammatically correct phrases until the grammarian inside of you is infinitely content.

All in all, the game is a cheerfully built puppy dream (which is also a decently scoring phrase). Sleep Furiously is available today from Apple, Google, and Amazon for iOS and Android.

You might think it’s impossible to run out of wind, but Europe’s “wind drought” proves otherwise. And it’s only going to get worse.
Up Next
Politics & Current Affairs

National Prayer Day, or ‘It’s OK Not to Have a Religion Day’

Today is our National Day of Prayer, emphasis on “our” and “National,” meaning freedom is the prevailing principle through which to approach our discussions (and Internet comments).