The word “conspiracy theory” only dates back to 1909 and didn’t have an explicit association with paranoia and delusion until the 1960s. In the short time that the modern notion of conspiracies has existed an endless slew of them have been cooked up. From claims that the US government planned and carried out 9/11 to claims that Elvis faked his death, the idea that major events are part of a larger plan is a common one. Some conspiracy theories turn out to be true, others, not so much.

However, despite the relatively recent invention of the term the basic idea of many conspiracy theories, that events are planned and carried out by mysterious and powerful forces for their benefit, goes back two and a half thousand years. At least according to philosopher Karl Popper.

In his short essay The Conspiracy Theory of Society, Popper begins by describing the worldview of the ancient Greeks. For them, the Gods took an active interest in human affairs and anything that happened had their tacit approval. Events like the Trojan war were the direct result of divine meddling in human affairs. Popper believes that this belief never faded away and that now, instead of using God, conspiracy theorists suppose events are orchestrated by “various powerful men and groups—sinister pressure groups, who are to be blamed for having planned the Great Depression and all the evils from which we suffer.”

Popper is suggesting that many conspiracy theories are based on the idea that a social outcome is evidence of an intentional order, and that random occurrences are rarely, if ever, relevant. He posits that people are attracted to this worldview for two reasons. Firstly, because people are often unaware of theunintended consequences of mundane occurrences and discount them when trying to explain the causes of major events and secondly because humans have a habit of assuming that all events were the intended cause of a prior action.

He gives an example of a man who buys a house. That purchase then causes the price of all remaining homes to go up a little. The buyer didn’t intend to raise the prices of the other houses, but it still took place. The conspiracy theorist, who believes all major socio-economic events are planned, will then assume some malicious organization of real estate agents has taken steps to inflate prices. It takes an understanding of how purchases have unintended effects on prices to know that there is no conspiracy at work and that the inflation was unintended.

As it is with houses and economics, so it is with society and all social sciences, alleges Popper. Ignorance of causes combined with the search for them leads to grand conspiracy theories.

Does this explain all conspiracy theories? Is it all just ignorance of unintended causes?

Popper is talking mostly about one kind of conspiracy theory. Specifically, the kind that alleges that most, if not all, major events are planned and executed by some cabal of the powerful who stand to gain from them. Those theories try to explain why events take place. He isn’t aiming at false flag theories or theories that suggest the government is covering up the existence of aliens. 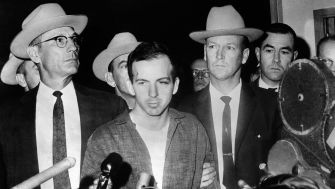 Lee Harvey Oswald after his capture. Conspiracy theories that suggest he didn’t act alone in the assassination of President Kennedy are exactly the kind that Popper is talking about. We just don’t want to admit or can’t fathom how a major event could have such an odd cause. We demand a larger scheme. (Getty Images)

He is also not saying that no conspiracy theories are true. The idea that sometimes people do conspire to do significant things and then act on those plans remains a possible though rare occurrence. He categorizes Hitler’s reaction to what he preserved as a worldwide conspiracy against Germanyas a “counter-conspiracy” in which most of German society worked to disenfranchise, ostracize, and ultimately kill off the Jews. The fact that the Nazi plan failed and was not secret doesn’t make it less of a conspiracy.

Are all conspiracy theories superstition as Popper implies some are? Probably not, as Big Think contributor Cass Sunstein reminds us that “the domain of Popper’s explanation is quite limited, ” in his essay on conspiracy theories. However, Popper does give us a tool to help understand why some outlandish ideas manage to catch on. Some people either don’t understand or don’t want to realize that sometimes random events can have significant consequences and nobody is in control of things.

After all, it can be comforting to think that somebody is in control of things; although the information we have on conspiracies that happened suggests that the powers that be aren’t good enough at keeping secrets to pull off the kind of thing Popper is talking about.

Related
The Past
How the death of alchemy gave birth to modern science
Far from practicing witchcraft, the experimentation of medieval alchemists helped bring about the Scientific Revolution.
The Well
This is what the fourth dimension looks like
Left–Right, Back–Forth, Up–Down. What’s the fourth dimension?
▸
3 min
—
with
Brian Greene
The Present
How heat pumps of the 1800s are becoming the technology of the future
Innovative thinking has done away with problems that long dogged the electric devices — and both scientists and environmentalists are excited about the possibilities.
Starts With A Bang
JWST’s hunt for most distant galaxies gets double boost
Along with gravitational lensing and ALMA’s incredible long-wavelength spectroscopy, JWST is reshaping our view of the early Universe.
Thinking
Finding your essential self: the ancient philosophy of Zhuangzi explained
Adopting a healthy scepticism towards inherited ideas means “emptying the container of the Self.”
Up Next
Starts With A Bang
Ask Ethan: How Will Our Universe End?
In the far future, the last star burns out, stellar corpses get violently ejected, and galaxies accelerate away. And then the fun begins.For centuries, the biggest questions about our Universe were […]