“Kill ‘em and leave, Rev,” singer James Brown told his protégé, the Reverend Al Sharpton, when he made a quick exit after a sweat-soaked, soul-and-funk—fueled performance.  This “hit and run” style made Brown an icon and an enigma, a beloved artist that nobody—even those closest to him—felt they really knew.  Author-musician James McBride’s Kill ‘em and Leave: Searching for James Brown and the American Soul sets out in search of James Brown and discovers that the path to him parallels the path to America’s race-torn soul.  But figuring out James Brown’s “impossible,” McBride writes. “Because to figure him out, we’d have to figure ourselves out.  And that’s like giving an aspirin to a two-headed baby.”  McBride might not find a cure, but he renders a fascinating diagnosis. 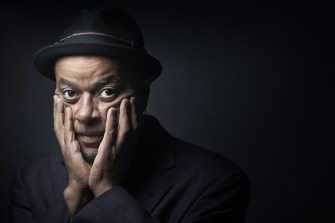 Few writers today tackle race relations in America with the wit and insight of James McBride (shown above), whose The Good Lord Bird, won a National Book Award for Fiction in 2013.  In that novel, McBride recounted the story of firebrand abolitionist John Brown, the polarizing figure that helped ignite the Civil War.  Just as people passionately hated or loved John Brown, many passionately hated or loved James Brown.  Just as McBride resurrected John, he hopes to do the same with James.  Thanks to misleading Hollywood biopics such as 2014’s Get on Up, James Brown’s “tumbling towards history as an enigma,” McBride argues.  “Movies are simple,” McBride says simply. “And Brown’s life was anything but that.”  Oversimplifying Brown’s complex life and art does an injustice to the man, just as oversimplifying the American racial landscape perpetuates injustice to people of color.  With nuance and brutally frank honesty, McBride looks at Brown to focus on Black and White.

First of all, McBride reminds older people of just how dynamic James Brown, “Mr. Dynamite,” could be while introducing a new generation to “The Hardest Working Man in Show Business.”  Before disco killed his career and a host of illnesses killed the man in 2006, nobody outperformed “The Godfather of Soul.”  When white promoters insisted the Rolling Stones close the 1964Teen Age Music International Show later released as the 1964 concert film The T.A.M.I. Show, Brown took it as a personal challenge.  Brown’s singing and dancing performance (shown in the video above) made the Stones “sound like a garage band by comparison, with [Mick] Jagger dancing around like the straw man in The Wizard of Oz,” McBride writes.  (You can see the Stones’ performance here.)  For Brown, “killing” the audience was the best revenge for racist disrespect.  Alas, Jagger, 40 years later, rewrote the story of that night as co-producer of Get On Up.  Winners write the history, of course, but McBride wants Brown to win in the end. 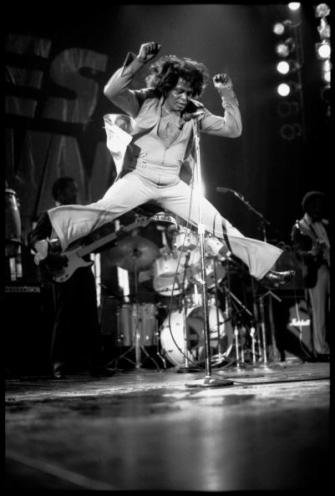 Rather than write a straightforward biography of a man who zigged and zagged on the stage and through life, McBride riffs on elements of Brown’s life by visiting the people who knew and worked with him.  Chapter by chapter, interview by interview, McBride pieces together the puzzle of James Brown—or at least lays the pieces on the table for us to connect.  Any attempt to truly hold the man down is a lie, McBride proves.  “To the music world, he was an odd appendage,” McBride writes, “a kind of freak, a large rock in the road that you couldn’t get around, a clown, a black category… The man simply defied description.”  But what makes Brown, the son of sharecroppers who rose to fame but lost it all in a mess of financial entanglements, so indescribable.  “The reason?” McBride responds.  “Brown was a child of a country in hiding: America’s South.” 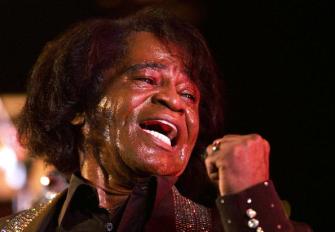 The American South remains the undiscovered country at the heart of American society and politics, the place where modernity and reason seemingly go to die.  The impetus for McBride’s search stems from the sad fact that in 2016, a full decade after Brown’s death, the $100 million fund Brown set up to educate poor children in the South (with a will he spent $20,000 on to ensure it was foolproof) still hasn’t gotten a penny to those children.  Instead, in a “case… bound by race, blood, nepotism, and feuds that reach back to slavery and the Reconstruction that followed,” lawsuits continue to bleed the fund dry, McBride explains.  “A weird toxic trio of good-old-boy lawyers, Brown’s children, and his poor white widow” battle over the money, denying the poor children the gift Brown, who stressed education and hard work to young people his whole life, meant for them.  “Only a local would understand,” McBride says over and over, knowing that anyone outside the South cannot. 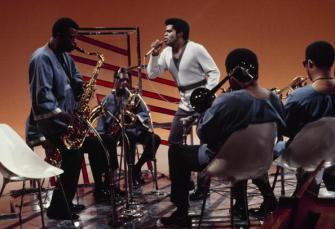 As great as McBride’s finesse talking about race or society is, it’s a true education reading him talk about music.  He digs into the “James Brown sound” to revive the memory of great players such as saxophonist Alfred “Pee Wee” Ellis (who blew on “Say It Loud – I’m Black and I’m Proud”) and guitarist Jimmy Nolen (the “chicken scratch” sound on “I Got You (I Feel Good)”).  McBride compares Brown as musical leader to the more highly respected Jazz giants Duke Ellington and Count Basie, all leaders of a creative community.  McBride also redeems Brown’s sound from jazz snobbery, comparing jazz to basketball and funk to baseball.  You need multiple skills to play jazz/basketball, but you need specific skills to play funk/baseball.  Neither’s better nor worse than the other.  They’re just different.  Reading McBride on Brown and funkiness made me crank up funk epic “Ain’t It Funky Now” with a whole new appreciation, as well as a sadness over just how underappreciated Brown and this style of music are today.  Is that lack of appreciation and recognition racist?  McBride reports and reflects.  You decide. 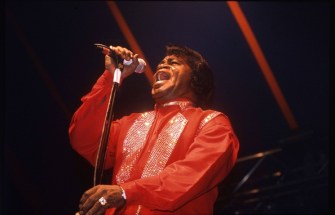 We’re living in a golden age of writing about race in America, tragically inspired by a dark era of race relations.  #BlackLivesMatter has led to #BlackBooksMatter.  Ta-Nehisi Coates’ Between the World and Me and Claudia Rankine’s Citizen: An American Lyric both won awards while opening eyes.  James McBride’s Kill ‘em and Leave: Searching for James Brown and the American Soulmay soon follow.  What sets McBride’s book apart from his award-winning predecessors is how he uses James Brown as a case study in American race relations.  Coates and Rankine both try to embrace the pervasiveness of racism with a wide-ranging view of the landscape.  By putting James Brown center stage in his study, McBride allows us to see more clearly what we’ve been missing all along.  “Every man or woman in this life has a song, and if you’re lucky you can remember it,” McBride writes.  “For African Americans, the song of our life, the song of our entire history, is embodied in the life and times of James Brown.”  McBride sings that song loud—he’s black and he’s proud—and dreams of a day we remember the James Brown in our own American soul, regardless of race.

A study finds that older adults who cannot balance on one foot for ten seconds have an 84% higher risk of death than those who can.
Up Next
Surprising Science

You may not have heard, but agriculture is about to undergo a truly organic revolution. Indigo is one of many agriculture businesses that’s researching how microbes can help increase crop yields even as our climate changes.