“DEAR DOWNLOADER of MUSIC,” musician-artist Amanda Palmer writes on her online shop page, “this store is built on a ‘pay what you want’ philosophy for my digital music. i firmly believe in music being as free as possible. unlocked. shared and spread.”  That openness (“honor system. no judgment.”) comes with a purpose: “once you have it, SHARE SHARE SHARE! COPY COPY COPY! SPREAD THE EVIL!!! we are the media.”  On this, Amanda Palmer’s 40th birthday, it’s time to ask if she and her artistic philosophy are the prototype for the artist of the future. 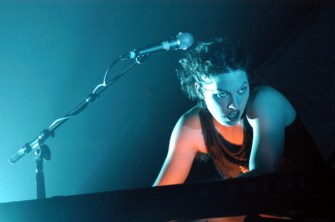 Say what you will about Amanda Palmer (and she has many detractors as well as many fans), she knows how to get your attention.  From her dramatic onstage presence (example shown above) to her in-your-face punk rock look and sensibility, Palmer demands recognition.  Aligned with that attention-grabbing persona is her highly engaged social media presence on her personal web page, blog, online videos, Facebook page, Twitter, Tumbler, YouTube channel, and Instagram.  She even has an online multimedia “beginner’s guide” to her and her work called “Amandalanda.”  It’s status quo for artists today to branch out into social media, but Amanda Palmer adopted early and often.  For her, social media’s always been just as important as the art itself, whereas others see it as just a lower-priority marketing tool.

Most people know Palmer primarily through her popular TED Talk, “The Art of Asking,” which has been viewed nearly 8 million times (video above).  Palmer spun that talk off into a bestselling book of the same name.  (For more of Palmer’s thoughtful insights on life, the universe, and everything, check out her BigThink podcast.)  The talk’s theme of using one’s vulnerability to reach out and connect with others touched a nerve with the general public that her loyal fans had understood for years.  The power of Palmer’s vulnerability comes from the unfiltered directness of her interaction with her fans.  Since telling her record label Roadrunner Records to “Please Drop Me” in 2008, Palmer’s “gotten to know [her]self,” she writes on her Patreon page.  “as a creator, as a songwriter, and as a recording artist, i thrive on instant gratification and a direct mainline to my audience without having to go through labels, distributors, the machine, the mass media,” Palmer explains. “i love making things and instantly sharing. and i know my fanbase: you’re smart, kind, supportive, future-platform embracing people.” This mutual trust between artist and audience—cutting out the middleman and the middleman’s cut of the profits—not only drives Palmer’s creativity, but also might be the paradigm for other artists looking to find an audience without selling their souls to the gatekeepers. 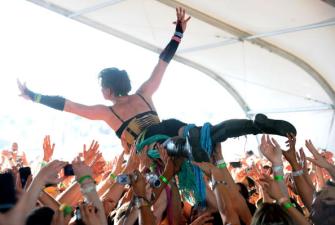 As she mentions in her TED Talk, Palmer couch-surfed long before she hit it big, using The Shadowbox as her connection with her fans around the world since 2001.  Palmer relied on the kindness of strangers believing that allowing others to be generous is as important as being generous yourself.  I love the Coachella image of Palmer appearing to soar while supported by her fans (shown above) because it emblemizes their relationship.  What artist wouldn’t want that kind of relationship with their audience?  Talent certainly is a prerequisite, but talent isn’t enough.  Palmer’s talent for engaging her audiences—for taking that leap of faith into their real and virtual arms—is a talent artists of the future need to cultivate if they hope to survive and thrive. 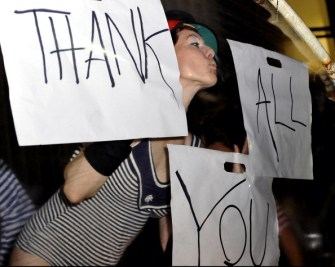 But a free place to crash for a night or a free home-cooked meal only get you so far.  Palmer’s 2011 Kickstarter Campaign for her Theatre Is Evil album raised $1,192,793 from 24,883 backers. (Palmer shows her thanks to her backers above.)  But Palmer recognized the Kickstarter model might not be sustainable.  “while kickstarter is awesome for huge one-time projects,” she acknowledges. “i don’t want to do get repetitive and exhaust the fanbase with ‘HEY I’M MAKING YET ANOTHER RECORD, PRE-ORDER HERE….AGAIN!.’”  Instead, she moved on to Patreon, a platform where fans can pledge long-term support for exclusive access to her latest productions arriving roughly once per month (aside from a hiatus to “produce” her first child).  “kickstarter was like a serious date,” Palmer explains, “this [Patreon] is like getting married.”  Artists facing an economic crunch should take note of Palmer’s model as a way of building a patronage base to smooth out the financial ups and downs.  As Palmer points out, Scientist Neil DeGrasse Tyson, Arts Journalist Geeta Dayal, and Photojournalist Martin Gommel also use Patreon, so maybe you should, too. 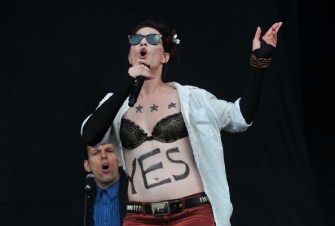 If nothing else, Amanda Palmer stands as a prototypical attitude for the artist of the future, a huge “YES” (shown above) when others say “NO.”  “it is, in these days of negativity and tumblr outrage, the bright side of the net,” Palmer writes.  “it is how the web can really *save artists* in an art-economy that is floundering.”  For artists, that positivity flings a life-preserver of hope into the sea of doubts.  Palmer’s example also speaks to audiences hoping for art that will continue to engage and inspire them.  “AND it means YOU [the audience] need to step up and support the artists you love, the political cartoonists you want to see bravely satirizing the system, the painters you want to see reflecting their realities, the musicians you want filling your hearts and your speakers, the journalists you want to see writing about the state of the world,” she exclaims.  If all artists worked more like Amanda Palmer (and all lovers of art acted like her fans), the state of the arts of today and the future would be a lot healthier and a lot more hopeful.  Happy Birthday, Amanda Palmer!  May you give birth to a modern arts revolution!

Ask Ethan: Why is Jupiter hit by so many objects in space?

Image credit: Константин Кудинов, under a c.c.a.-s.a.-3.0 license, of the Chelyabinsk meteor in Russia.And could what we see over there spell disaster for Earth?“An asteroid or a supervolcano could certainly destroy us, […]