In the US, about 1-in-42 boys and 1-in-189 girls develop autism spectrum disorder (ASD), according to the CDC. That ratio has increased since the 1970s and 80s, when ASD affected roughly one out of every 2,000 children. There’s a debate however, as to whether there has truly been a rise, or if increased awareness and changing definitions has allowed us to recognize autism more readily than in years’ past.

Gary Goldstein, MD is the president and CEO of the Kennedy Krieger Institute in Baltimore, Maryland. He told WebMD that autism will be harder to cure than cancer. At least with cancer he said, there’s a tumor. There’s no readily available physical evidence of ASD which can be studied and experimented with. So far, no particular biomarkers have been isolated.

There are some leads. Researchers know that genetics plays a role, as it seems to run in families. There are also some environmental factors being looked into including pesticides, certain drugs, having children in later years, an neurotransmitter imbalance, and irregularities in brain development. It’s possible that two or more factors cause or contribute to autism. A newly published study in the journal Scientific Reports, adds one more cause to the mix.

Medical researchers, from the University of Bristol in the UK, looked at the cases of 14,500 people who grew up in the 1990s. What they found was that if a girl’s grandmother smoked while she was pregnant with her mother, that girl has a 67% higher chance of developing autism-like symptoms. These included repetitive behaviors and poor social communication skills.

Another shocking find, if a maternal grandmother was a smoker, it increased her grandchildren’s risk of an ASD diagnosis by 53%, no matter their gender. Tobacco smoke has been shown in previous studies to damage mitochondrial and nuclear DNA. Women are born with all of the eggs they will ever have. This research suggests that exposure to cigarette smoke by females in the womb affects their developing eggs, which decades later, impacts their own children.

This was part of a long-term project known as the Avon Longitudinal Study of Parents and Children (ALSPAC). In 1991 and 1992, researchers recruited pregnant women for the study. By collecting a mountain of data on them and their children over the years, they were able to rule out other causes for ASD. 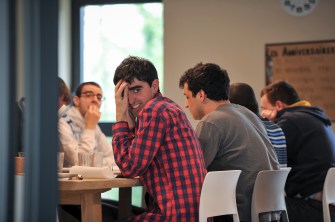 Investigators also looked at 7,000 participants closely, to analyze the presence of autistic traits. 177 of the children involved had some form of ASD. This is where they discovered the impact of a maternal grandmother’s smoking on an autism diagnosis. But these were too few subjects to parse out the exact effect on granddaughters versus grandsons.

Professor Marcus Pembrey was one of the authors of the study. He said in a statement:

“In terms of mechanisms, there are two broad possibilities. There is DNA damage that is transmitted to the grandchildren or there is some adaptive response to the smoking that leaves the grandchild more vulnerable to ASD. We have no explanation for the sex difference, although we have previously found that grand-maternal smoking is associated with different growth patterns in grandsons and granddaughters.

More specifically, we know smoking can damage the DNA of mitochondria — the numerous ‘power-packs’ contained in every cell, and mitochondria are only transmitted to the next generation via the mother’s egg. The initial mitochondrial DNA mutations often have no overt effect in the mother herself, but the impact can increase when transmitted to her own children.”

Boys are far more likely to develop ASD than girls. Why is still unclear. Getty Images.

Besides unaccounted for sex differences, other limitations include researchers depending on parent input for child behavior, and the results limited to white parents residing in Britain. Moreover, the results need to be confirmed, as research surrounding ASD remain controversial. There’s been a lot of misreporting and other issues. Because of this, experts are guardedly optimistic about these findings.

The sharp decrease in smoking rates, at least in the US and other industrialized countries, could show a drop in ASD, as we move ahead. One question this study raises is, might there be other transgenerational causes? No one yet knows. But Prof. Pembrey and colleagues do point out that a multitude of factors result in whether or not a child develops ASD, including certain genetic features and perhaps other environmental ones as well.

Related
Hard Science
Some earthquakes last for seconds, others for minutes — and a few for decades
What do you call it when the Earth shakes for three decades?
Sponsored
What childhood “money story” is shaping your financial behaviors?
Here are the signs that you inherited “money anxiety” from your parents.
The Present
The “maritime Indiana Jones” who salvages shipwrecks now wants to tow icebergs
Simple physics makes hauling vast ice chunks thousands of miles fiendishly difficult — but not impossible.
Neuropsych
Inside the brains of aging dogs
In a citizen science project, thousands of pet dogs are helping scientists to understand what happens to memory and cognition in old age.
Neuropsych
The most common source of awe might surprise you
It’s us.
Up Next
Mind & Brain
Psychology Tells Us There Are 2 Kinds of Politically Correct People
A new study says there are two main categories of politically correct people – PC egalitarian and PC authoritarian.