You’re putting that where?!

A company in Sweden has been putting microchips in their employees in order to improve efficiency. Frustrated by the hassle of finding keys for doors or a debit card for food? Employees as the Stockholm-based Epicenter can literally use their hand. And while having the microchip implant is currently not mandatory for workers there, the prospect of technology inserted into our body sets off some understandable Orwellian fears. There is a fine line between efficiency and control with new technology.

Forget apps. In the near future, we may be saying, “There’s an implant for that.“

So, Why Does This Get Under Our Skin?

On one hand, technology being embedded into our body is nothing dramatically new. Pacemakers, for example, have been used for years to normalize heart rates by sending low-energy electrical pulses. Cats and dogs have also been getting microchipped for quite some time.

On the other hand, microchipping humans is a concept that can easily conjure up images of a dystopian future where everyone is permanently connected to the internet and constantly tracked. There would be no ability to unplug if you are permanently plugged in. And there would be no sense of privacy if you are a perpetual source of data generation. In order to get a full grasp on the issue of microchipping, I reached out to Gerd Leonhard. Gerd is a Swiss futurist and humanist, and author of Technology vs. Humanity: The Coming Clash Between Man and Machine. 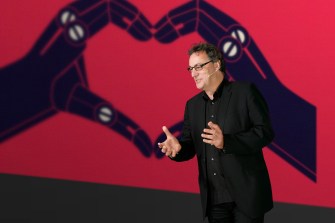 The Implants Are Coming

“This is about Human Augmentation,” states Gerd, “and I am afraid it will become as normal as using a mobile phone.” In order for that to happen, Leonhard believes that the microchips used will be much more sophisticated. He cites the prospect of general “apps for the body.” In the near future, we may have nanobots in our bloodstream for monitoring our health, or perhaps internet-enabled contact lenses.

“Tracking chips will become the size of a pin-head,” Gerd continues, “and they will connect to your always-on internet device such as smart watches or wimax networks in major cities.” The futurist believes that the economic incentives behind connecting everything to the internet (internet of things) will make the microchipping inevitable. Gerd sees this as an extension of the Quantified Self movement and what he calls the global brain. While this may be heaven for some, Gerd points out, it could be hell for others.

Gerd believes that microchipping could be considered normal after the process is viewed as easier and less evasive. What people are most concerned about, however, is being forced into having technology embedded into their skin by an employer. “Would you rather be wired or fired?,” states Gerd, imagining a future where under the guise of efficiency and security companies will require employees to be microchipped.

While microchipping would have some obvious security and efficiency benefits, Gerd mentions the irresistible temptation that employers may have is utilizing the technology to track one’s whereabouts, patterns, and perhaps direct data from the body (is the employee stressed? Depressed? Sick?). In order to ensure that microchipping technology is not abused by employers, Gerd recommends proactive legislation to consider the privacy concerns and ramifications of its usage.

Is Microchipping an Upgrade or Downgrade?

“I think we have nothing to gain from a complete symbiosis of man and machine,” states Gerd, “and we have everything to lose.” What he sees as a folly is our pursuit of trying to transcend humanity, as opposed to agreements on new digital rights. With luminaries such as Elon Musk stating that we need to merge with machines, it is clear to see this will be a hotly contested issue in the years to come.

Gerd’s summarizes his positions on technology versus humanity by stating, “embrace technology but don’t become it.”

Perhaps asserting our humanity is the ultimate upgrade.

Reading between the lines of Dorothy’s adventure to the Emerald City.
Up Next
Starts With A Bang

The dusty regions that visible-light telescopes cannot penetrate are revealed by the infrared views of ESO’s HAWK-I instrument, showcasing the sites of new and future star formation where the dust […]