There have already been many explanations given to explain why the Democratic party’s nominee Hillary Clinton lost the U.S. Presidential elections in 2016. They range from personal failings, DNC campaign shenanigans, FBI director Comey’s letter to Congress, turnout issues, forgetting the working class, not finding a way to connect with enough disaffected Bernie Sanders voters to over-relying on data analysis and incorrect polls. But besides all that, partial responsibility for her loss must lie with WikiLeaks, an organization that built a reputation for disclosing secret information to the public in the interest of greater transparency, but which, in effect, helped destroy the image of Hillary Clinton in the mind of many possible voters.

The email dumps by WikiLeaks exposed Clinton’s paid Wall Street speeches, a possible conflict of interest with the Clinton Foundation, and the fact that she got some questions passed on to her before the debates. But it was the release of emails from DNC officials that suggested the Democratic party was playing favorites and was set on Clinton winning the nomination that probably did the most damage. Apparently, DNC got so annoyed with Bernie’s surging candidacy that it was looking for a way to slow his momentum, even considering whether to use his religion against him.

A further WikiLeaks dump right before the election worsened the perception of DNC’s mistreatment of Bernie Sanders by suggesting Bernie was somehow blackmailed by the Clinton campaign during the primary campaign.

All the leaks proved highly embarrassing for the Clinton campaign and worked to further alienate Sanders’s voters. Certainly, many of them came on board anyway, but as the results in Michigan and Wisconsin show, it’s very possible Clinton did not connect with enough of Bernie’s voters to get her over the top in those states. Both of them were won by Sanders in the Democratic primaries.

The revelations by WikiLeaks also contributed to the hard-to-shake perception of Hilary Clinton and her campaign as secretive and somehow deceitful. Maybe the disclosures did not change the minds of many voters, but in a close election, they could have very well made enough of a difference, even just by driving down the excitement and turnout of her potential supporters.

So why did WikiLeaks do it? Did it want Trump to be elected President?

This cartoon from the WikiLeaks page with a searchable archive of Clinton’s emails shows a clear stance on what the organization thinks of the Secretary of State, drawing her as a corporate warmonger — 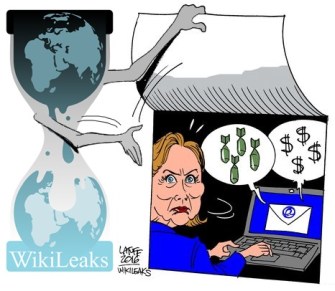 It was criticized by Edward Snowden, himself famous for disclosing classified information in the interest of transparency. In his tweet, he accused WikiLeaks of not having “even modest curation” of what it releases and how.

Democratizing information has never been more vital, and @Wikileaks has helped. But their hostility to even modest curation is a mistake.

From corrupt czars to bloodthirsty Bolsheviks, Russia has had no shortage of bad leaders. But just how evil were they really?
The Past

A mineral made in a Kamchatka volcano may hold the answer to cheaper batteries, find scientists.
The Present

What qualifies someone for the top position in American government?
Up Next
Surprising Science

Should 18 Year-Old Men Bank Their Sperm?

While some experts say it will help preserve the health of a country’s population, others call it unethical.