The Dalai Lama recently co-authored (with Arthur C. Brooks) an Opinion piece in the New York Times that presents a compelling reason for the anger that drove the 2016 presidential election: A feeling among many that the world no longer has any use for them. (The choice of messenger is a separate issue.) And it’s not just an issue in America — it’s the cause of a simmering discontent throughout many of the world’s wealthier nations.

For those of us who’ve watched in horror as the American sense of community was blown to bits on the campaign trail, it’s reasonable to wonder how we can ever put the pieces back together again. The Dalai Lama’s insight offers us a bridge to understanding, and maybe even reconciliation.

“We all need to be needed,” he says in the Times, citing a 13th-century Buddhist aphorism: “If one lights a fire for others, it will also brighten one’s own way.” 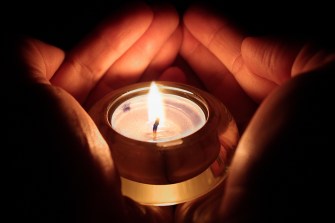 It’s a very human, and humane, perspective. Most of us have at one time or another had the feeling of being superfluous, as if our disappearance from the face of the earth would scarcely be noticed. It’s a horrible feeling of isolation and hopelessness, and one’s heart can’t help but go out to anyone feeling this way. And that empathy can be a start.

The huge career dislocations caused by the 2008 recession stole from many the source of their sense of value to their families and themselves: their jobs and incomes. It’s a shock to the spirit from which many haven’t recovered, and it’s safe to say that few U.S. workers feel more secure after that financial cataclysm laid bare a system so heavily stacked against them. The story is much the same everywhere in the world. Is it any wonder when a strongman arrives with vague promises of a fix — and dark hints of retribution against, well, someone — and is embraced, whether that’s the U.S., Britain, Russia, or the Philippines?

The Dalai Lama notes that one of the things religions agree on is the importance of service to a happy life. Studies support the idea that feeling useful helps alleviate depression, and the Times piece mentions a recent study that found people who feel needed live longer. For anyone, the sense of self-worth derived from helping others paradoxically makes being selfless one of the most effective — not to mention positive and productive — ways to be selfish.

So what can we do? The Dalai Lama suggests two approaches.

The first is personal. “We should start each day by consciously asking ourselves, ‘What can I do today to appreciate the gifts that others offer me?’ … Each of us has the responsibility to make this a habit.” Put in simpler terms, we need to more consciously and regularly let others around us know how much we value them, especially when they may doubt it themselves.

One outcome of the upward redistribution of wealth in the U.S that’s occurred since the 1970s is that those who haven’t benefited from it are reduced to fighting among themselves for what’s left over. It’s a deadly formula for an inevitable escalation of anger and conflict among the less privileged. This means that the justification for a compassionate society isn’t just moral. It’s the only practical solution to an unsustainable and cruel cycle of anger and despair.

The device will deliver results in just 15 minutes.