Down in the dumps? You’d better watch your wallet, among other things.

We all face dozens of choices every day between instant gratification and delayed rewards, perhaps too often opting for the immediate pleasure. But as Harvard University researcher Jennifer Lerner and two colleagues report in Psychological Science, we are much more likely to make short-sighted decisions when we’re sad.

The biases that accompany the blues could be contributing to America’s scourge of credit card debt, rampant obesity and even the growing national debt. Policy makers ought to take notice. The sadness-irrationality link, which Lerner calls “the myopia of misery,” is real.

Scrutinizing the so-called “sadder is wiser” adage in the context of intertemporal choices, Lerner, Ye Li and Elke Weber conducted three experiments to see how mood affects financial decisions. In one study, 202 participants were shown one of three short video clips before being asked to make “27 choices between receiving cash amounts today (between $11- $80) and larger cash amounts (between $25-$85) at points in the future ranging from one week to six months.” One of the videos depicted the death of a boy’s mentor, another concerned an unsanitary toilet, and the third was about the Great Barrier Reef. They were designed to provoke, respectively, a “sadness condition,” a “disgust condition” and a “neutral state condition,” and questionnaires confirmed that they did in fact create these emotional states in the subjects.

How did sadness skew the subjects’ choices?

Sad participants were more impatient than neutral participants in their choices, i.e., more willing to forego larger rewards in the future to obtain smaller rewards now.

Specifically, sad participants settled for $37 today rather than $85 in three months’ time, but neutral participants demanded $56 today to give up a claim the same future pay-out. The same phenomenon was evident in the other two studies:

Across three experiments, the median sad participant valued future rewards (i.e., delayed by three months) 13% to 34% less than the median neutral-state participant. These differences emerged even though real money was at stake…

The upshot: sad people are ill equipped to look out for their financial futures. The sadder you are, the poorer you might end up a few months or a few years down the line.

Some degree of bias toward the present is rational given the uncertainties of what lies ahead: we might opt for a lump-sum payment today rather than a more lucrative pension in the future if we think the pension fund may go broke or the world might end. But too much “discounting” of the future begins to look irrational, or like a self-fulfilling prophecy, when you really behave as if there is no tomorrow. Robert Nozick explains the danger of over-discounting the future:

Time preference — the term some economists use for utility discounting of the future — may be evolution’s way of instilling in creatures that cannot perform such anticipatory probabilistic calculations a mechanism to roughly the same effect. Innate time preference may be a rough rule of thumb that approximates the behavior or decisions that calculations previously would have yielded…A problem arises, then, for beings with the cognitive apparatus to take explicit account of the uncertainties concerning a future reward and to perform explicitly a probabilistic discounting of the future.

The “double discounting” that results “is surely too much,” Nozick writes. And if that double discounting is exacerbated by sadness, an individual’s capacity for rational planning is triply compromised. In two of the experiments Lerner conducted, the sadness quotient was significant. The shorter bars in this graph represent more impatience and less fortitude in awaiting greater future benefits: 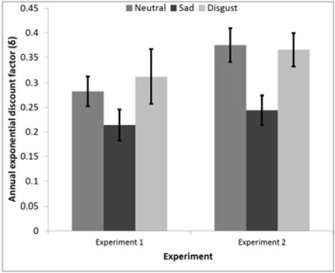 As stark as these findings are, they probably understate the degree of myopia governing the decisions of sad people in the real world. As Lerner notes in another paper, ethical and practical  considerations limited the experimenters to situations that would induce “only low-intensity emotion” in their subjects. An episode stirring “high-intensity sadness,” such as the death of a family member, “may be expected to show far greater effects on the high-stakes intertemporal decisions involved in settling a deceased person’s estate.”

If misery-induced myopia is as significant as it seems, we should take the phenomenon seriously. Maybe individuals receiving unemployment benefits should be required to meet with a financial consultant about their spending habits. Maybe companies should consider the fragile state of employees who have lost loved ones and give them added incentives to contribute to 401K plans at these times. As Lerner suggests, perhaps the FTC “cooling-off rule” — according to which you can cancel an economic transaction within three days if you think better of it — should be extended to real estate, insurance and securities sales.

Whether or not policy makers take notice, you should. As Michael Stipe sings in “Everybody Hurts,” the moving R.E.M. song, “sometimes, everybody cries.” There’s no reason to compound the misery with poverty.

Are You a Psychopath? Take the Test.

What’s the Big Idea?The famous “trolley problem” was a psychological experiment developed by Philippa Foot that involved a railway trolley headed toward five people who can’t get out of the […]