California is not waiting for climate change. State agencies recognize it’s already here and are preparing to combat a drier and, oddly, dependent upon the year, wetter future. That means more droughts and, when the dry spell breaks, much more flooding. Given the state’s role in national agriculture, this seesawing is a recipe for disaster that needs to be addressed now.

River Partners is one organization partnering with the state in preparation for this future. They’ve been buying land across California, especially in the flood-prone Central Valley, in order to plant acres upon acres of trees. They’re choosing particularly hearty breeds that can withstand flooding, as they plan on using these new forests to mitigate damage to farmlands and cities.

This is one positive example of purposefully changing environmental factors for the best possible outcome, at least in regards to human survival. (Planting monoculture forests, as Peter Wohlleben points out in The Hidden Life of Trees, does little for the quality of life of trees and the ecosystem inside of it, however.) Yet we don’t always know the wide boundaries of those outcomes. Sometimes human-constructed buffers don’t invoke the intended change. They also have a tendency of creating unintended consequences. 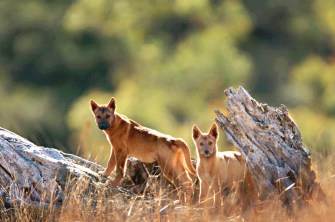 This has recently happened in Southern Australia. A 5,000-kilometer fence erected to keep dingoes away from certain fauna and flora has altered the entire ecosystem. On one side of the fence thick vegetation flourishes; on the other, shrubbery is sparse. A new study published in the Journal of The Royal Society Interface discovered that plant life on the non-dingo side is noticeably thicker and taller. Two separate worlds sit feet apart.

This isn’t the first time Australia has had such an issue. Rabbits were famously introduced to the island by the First Fleet, a British penal colony that served as the first European settlement. Though rabbits were brought as food, some escaped into the wilderness. The rabbits procreated like, well, you know, also destroying entire ecosystems. This problem has persisted for two-and-a-half centuries. 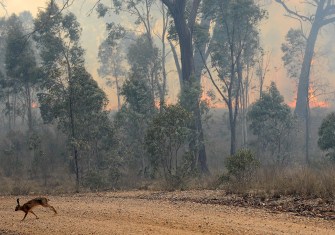 A rabbit (lower L) flees a bushfire near the town of Rylstone, northwest of Sydney, on November 22, 2009. (Photo by Torston Blackwood/Getty Images)

The researchers of the dingo study were intrigued by how the removal of one species affects an environment. As they write,

Unexpectedly, our findings pointed towards increasing shrub density as driving dunes inside the dingo fence towards a new, alternate stable state. Our paper shows that removal of a keystone species has had effects that may reach right down to the underlying physical structure of the landscape, within a model that suggests future restoration (e.g. via reintroduction) is plausible.

Every species affects its environment in drastic ways, humans being the most notorious of the lot. With an estimated two billion more people moving into cities by 2035, one can only imagine how these densely populated regions will tolerate such an overload. We also have to wonder what the rewilding of rural areas will bring.

The California model mentioned above is an example of concerned parties planning for an uncertain future. How many other plans we need to make remains to be seen, but as these state agencies know, change is inevitable.

After the 2011 Fukushima disaster, it was Germany, not Japan, that cracked down most severely on nuclear power plants.
Starts With A Bang

The key is finding which lifestyle suits you best: hedonic, eudaimonic, or experiential.
Up Next
Mind & Brain

Do the clothes make the man? With the Diderot Effect, material goods can help forge your whole identity.