Never leave the house without your keys, even the keys for your “keyless” entry. We all take keys, locks, and other everyday items for granted, overlooking them for their purely functional use and design. Dr. Albert C. Barnes, founding visionary of the Barnes Foundation saw much more in such commonplace metalwork. Inspired by the metalwork collection at the Musée de la ferronnerie Le Secq des Tournelles, Rouen, Barnes set out not just to elevate ironwork as an art, but also to compare it to the greats of modern art already in his collection, including Cezanne, Renoir, and Picasso. Two new exhibitions at the Barnes Foundation focus on Barnes’ “heavy metal” fixation and how it fit into his larger educational mission. 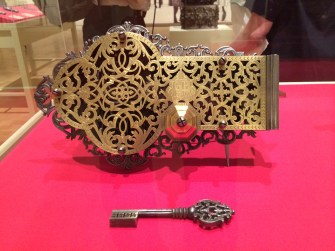 Anyone who’s ever been to the Barnes Foundation knows its renowned collection of modern art. Any student of Cezanne or Renoir needs to make the pilgrimage. Dr. Barnes founded his foundation on such modern masterpieces, but as he evolved as a collector and art connoisseur, he developed a new aesthetic surrounding those modern masterpieces, which allowed him to see connections not only between the new masters and the Old Masters, but also with the art of other cultures, especially the African art that inspired Picasso and others directly. Visits in 1936 to London’s Victoria and Albert Museum and to an old, ruined church in Rouen, France, repurposed as Musée de la ferronnerie Le Secq des Tournelles, home of beautiful examples of ancient, artisanal ironwork of Europe (such as the 18th century Wardrobe Lock and Its Keyshown above), added to his network of artistic associations. 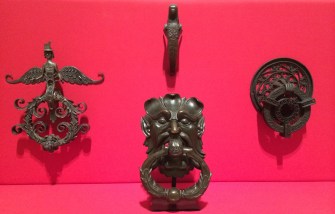 Since 2011, the Barnes Foundation’s been knocking on the door of the Musée de la ferronnerie Le Secq des Tournelles, Rouen, in hopes of uniting Barnes’ collection with the inspiration for that collection under one exhibition roof. The exhibition Strength and Splendor: Wrought Iron from the Musée Le Secq des Tournelles, Rouen, gives visitors a chance to experience what Dr. Barnes must have felt seeing works (such as the ornamental door knockers shown above) for the first time. The exhibition brings 150 wrought iron objects from Le Secq’s collection of more than 15,000 (the largest in the world) to complement the nearly 900 objects arranged among the galleries in Barnes’ idiosyncratic settings. 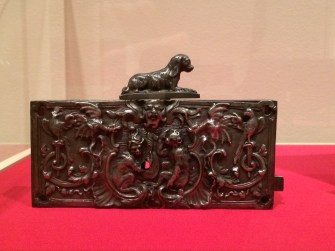 But why did Barnes place metalwork beside his million-dollar masterpieces? Scholar Richard J. Wattenmaker explains in the catalog:

“The democratizing impulse behind [Barnes’] project to make art accessible across the social spectrum was heartfelt, and his interest in ironwork seems absolutely appropriate, in particular his special predilection for simple, straightforward objects that bring home the idea that aesthetics and utility could be conjoined, and that beauty could be brought into everyday life.”

Marrying the educational philosophy of John Dewey and the aesthetic philosophy of Paul Valery, Dr. Barnes bridged the gap between high art and utilitarian art and found beauty in unexpected places — door hinges, locks, keys, and even kitchen utensils. Barnes approached that task seriously, but never lost his sense of humor. An ornamental door hinge might echo a similar curve in a Renoir nude’s figure, but it might also visually pun a different element in another painting simultaneously. Perhaps Dr. Barnes found his lighter side while looking at such pieces from Le Secq as the 18th century French Reaumur Lock With Monkeys (shown above), which features a diligent watchdog perched above as naughty monkeys frolic around the keyhole below. 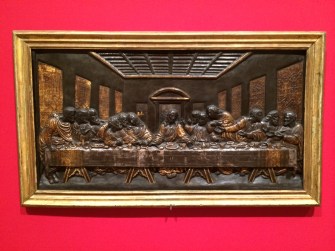 Walking through the Le Secq pieces — ranging from a late 16th century pedometer to a late 16th century punitive “Mask of Infamy” to late 16th century iron corsets — you quickly get the sense that the collectors, Jean-Louis Henri Le Secq Destournelles (1818-1882) and his son Henri Le Secq Destournelles (1854-1925), had much different priorities from those of Dr. Barnes. A photographic pioneer, the elder Le Secq learned to love wrought iron clambering around French cathedrals as he took close-ups of the sacred giants. The Le Secqs sought out “objects of the greatest complexity and finesse” (such as the wrought iron version of da Vinci’s Last Supper shown above) writes Wattenmaker, whereas Barnes pursued “down-to-earth simplicity” that more easily harmonized with his paintings and other pieces. After Le Secq, you’ll never look at a lock the same way again. But after Barnes, you’ll look at a lock in a new way again and again. 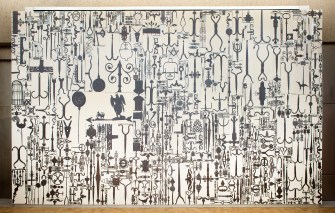 One criticism of Barnes’ approach, however, is how he rips objects from their social and historical contexts to help the viewer come to their own conclusions based solely on what’s before their eyes. In addition to providing context via Le Secq’s collection, the Barnes Foundation commissioned artist Ellen Harvey to paint her modern perspective of Dr. Barnes’ approach. Harvey’s Metal Painting(shown above) features painted silhouette portraits of all 887 iron pieces in the Barnes Foundation’s collection each applied with magnets to a steel wall, portions of which shine through the gaps between the portraits, which Harvey fitted together like a jigsaw puzzle in the 15-by-24-foot space. While celebrating how Barnes broke barriers in celebrating forgotten iron artisans, Harvey’s Metal Painting reminds us of the “musical chairs” approach Barnes took to arranging and constantly rearranging his pieces that only stopped at his death. Frozen since 1951, Barnes’ collection was never meant to be static, at least in the minds of viewers. As Wattenmaker points out, we’ve all become so accustomed to museums setting up such comparisons between genres and artists that we’ve lost sight of just how radical Dr. Barnes’ democratizing mission through art really was. Of all the “heavy metal” meanings of Strength and Splendor, that reminder might be the heaviest.

[Many thanks to the Barnes Foundation for an invitation to the press preview for and a copy of the catalog to Strength and Splendor: Wrought Iron from the Musée Le Secq des Tournelles, Rouen, which runs through January 4, 2016. Many thanks also to the Barnes Foundation for providing me with the installation image of Ellen Harvey’s Metal Painting (2015), which also runs through January 4, 2016.]

[All other images are installation photos taken by Bob Duggan at the press preview.]

Related
Hard Science
Some earthquakes last for seconds, others for minutes — and a few for decades
What do you call it when the Earth shakes for three decades?
Sponsored
What childhood “money story” is shaping your financial behaviors?
Here are the signs that you inherited “money anxiety” from your parents.
The Present
The “maritime Indiana Jones” who salvages shipwrecks now wants to tow icebergs
Simple physics makes hauling vast ice chunks thousands of miles fiendishly difficult — but not impossible.
Neuropsych
Inside the brains of aging dogs
In a citizen science project, thousands of pet dogs are helping scientists to understand what happens to memory and cognition in old age.
Neuropsych
The most common source of awe might surprise you
It’s us.
Up Next
Technology & Innovation
Tracking Facebook ‘Likes’ for Better Target Ads
After years of logging your likes and shares, Facebook is about to use them to create better targeted ads.