It’s not your imagination, folks. An increase in hate speech on social media—and especially, Twitter—is leading to increased hate crimes and violence away from social media.

The study, published in Social Science Research Network, focuses specifically on anti-Muslim hate speech and violence in the Trump era. There’s a strong correlation between accounts with high numbers of followers (such as the president of the United States) tweeting hate speech and racist remarks, and follow-up violence and hatred in public and even in private settings. In other words, offline.

“Weekly Hate Crimes in the United States since 1990, by President: This figure plots the average weekly number of hate crimes, by president. Panel (a) shows the full period of the presidency. Panel (b) shows the bar graphs for the identical end-of-year periods after the election. The bars indicate the 95% confidence intervals. The triangle marks the median.” (Source: Karsten Müller and Carlo Schwarz)

This doesn’t just happen in the United States, but all over the world. In fact, one rather chilling observation from a previous study by Karsten Müller and Carlo Schwarz is that in parts of the world that suffer an Internet outage, the actions of hate and violence actually decreased during that time. Major Internet and Facebook outages “fully undo the correlation between social media and hate crime.”

Müller and Schwarz’s latest 30-page paper is based on publicly available documents recorded by law enforcement and the FBI. 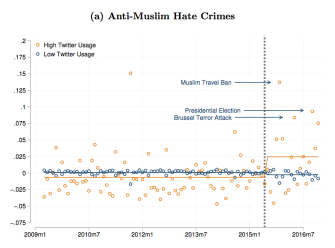 Monthly Hate Crimes by Twitter Usage: This figure plots the monthly number of anti-Muslim hate crimes per capita for counties above and below the 90th percentile of Twitter usage. The vertical line marks the beginning of Trump’s presidential campaign. (Source: Karsten Muller and Carlo Schwarz)

The correlation holds when certain keywords are used—for example, when hashtags or keywords such as ‘Islam’ or ‘Muslim’ are used by the president in a tweet. It’s also quite clear that in counties with a higher number of Twitter users, the hate crimes against Muslims are correspondingly higher after the original tweets go out. 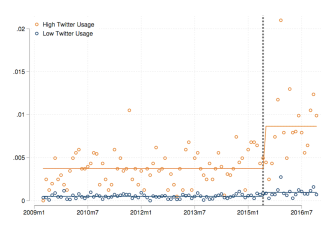 “Monthly Anti-Muslim Hate Crimes by Twitter Usage: This figure plots the monthly number of anti-Muslim hate crimes for counties above and below the 90th percentile of Twitter usage. The vertical line marks the beginning of Trump’s presidential campaign.” (Source: Karsten Muller and Carlo Schwarz)

Interestingly, there is no correlation between counties that are poorer or those that have higher crime rates and those with a higher percentage of anti-Muslim hate crimes.

It appears that social media—and more exactly, Twitter—is what is amplifying the problem.

So… what to do about that?