“Here’s to alcohol: the cause of, and solution to, all of life’s problems.” So sayeth noted philosopher Homer Simpson. It’s the ubiquitous social lubricant that makes it easier to socialize, and some would say, freely speak our minds and reveal our true feelings to others.

But is alcohol really a truth serum? The short answer is yes, but only for the kind of truth that leaks out of a brain that’s not working too well. Which is to say, no, not really. 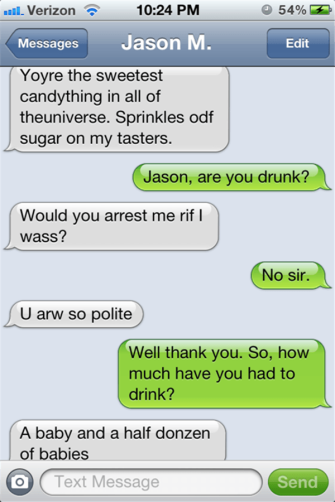 So what is going on when we tell someone we barely know how wonderful, no, I mean really great, they are when we’re smashed?

As a depressant, alcohol reduces some neurotransmitters and increases others.

Alcohol’s effect on your cerebral cortex is what makes your brain so, er, different when you’re drinking. This is where booze knocks clear thought off the rails, making you less careful about what you say and making Drunk You a stupid, brakes-off version of Real You.

A cerebellum on alcohol is out of whack, making the inebriated stumble, lose balance, and fall down, or maybe all of the above at once.

While it’s busy gumming up the works on one hand, alcohol also increases the amount of pleasure-inducing dopamine your brain releases. This is why alcohol makes you feel happy, even as it’s making your brain work less well.

Dopamine’s also the reason alcohol can seem to offer a respite from life’s problems.

Alcohol is the anesthesia by which we endure the operation of life. George Bernard Shaw

Of course, alcoholic logorrhea creates others. Hey, there are apps to help you avoid drunk dialing.

There are people who wonder why their loved ones only open up when they’re drunk. Is it the booze talking, or are these honest expressions of affection? It’s likely a question of drunkenness. If someone’s only slightly inebriated, such statements are more likely to be true because the the brain’s mostly still working. But while alcohol doesn’t make the brain function in a completely new way — which is to say you’re still in there somewhere — it does make clear thinking less likely, so the feelings being so freely expressed are the result of impaired thinking. They’re likely to align with the sober truth sometimes: Even a broken clock is right twice a day.

Meet the 2016 Olympics Refugee Team That Will Inspire the World

One year ago, Syrian refugee Yusra Mardini was swimming for her life in the Mediterranean Sea, desperate to escape her war torn country. This week, she will swim for gold at the 2016 Olympic Games in Rio de Janeiro.