Today, we’re doing something a bit different. Instead of focusing on a specific design-for-good product or idea, let’s focus on why it’s important to talk about these products and ideas in the first place. Over the past few weeks, some of today’s smartest design writers have raised what is an increasingly necessary question: Why is it that the culture of design critique has become so tragically reduced to chairs? The question, of course, isn’t actually about chairs – it’s about what ever self-indulgent article extolling the latest five-figure designer chair stands for: The pretentious preoccupation with aestheticism and status cues over the many more important design conversations to be had.

Last month, in writing about this year’s Milan Furniture Fair extravaganza, The New York Times‘ Alice Rawsthorn offered a cunning observation on the need for a shift in focus for furniture design. (Thanks, Helen.)

There is one question that everyone should sensibly ask before designing or making something to show at the Milan Furniture Fair. Does the world need another chair?”

Among other things, Rawsthorn pointed to the disconnect between what she calls “making things look good” and what could essentially be termed “making this do good.”

Rawsthorn is not alone. Just last Friday, Alissa Walker, who writes for FastCompany and GOOD Magaizine, penned a poignant and passionate opinion piece titled Why I Write About Design Now (a play on the title of Cooper Hewitt’s 2010 National Design Triennial, Why Design Now?), partly in response to this rather short-sighted critique of the Cooper Hewitt show by The New York Times‘ Holland Cotter.

In noting the fact that the Cooper Hewitt, at its 91st street locale, is completely physically removed from the downtown epicenter of New York’s Design Week, Walker observes:

The disconnect between these two vital organs is a discrepancy that plays out every day in design publications. But it becomes increasingly apparent every three years when the Cooper-Hewitt opens its show on the Upper East Side. I like to call it the battle of Design versus The Chairs. Not to pick on The Chairs. I like chairs. In fact, I’m using one right now. But the way that The Chairs have come to define and dominate every aspect of design coverage – especially during the one week denoted to New Yorkers as “design” week – is disheartening for a journalist who is supposed to be covering design. And the fact that all other activities during the United States’s biggest design event must rally and cluster around this seemingly pointless moment—the Great Coming of The Chairs—makes me want to gouge my eyes out with the legs of an Italian laser-cut stool.”

Beneath the cheeky tone, of course, lies the rather grave and unnerving observation that today’s design writing is more concerned with what it sits on than what it stands for. 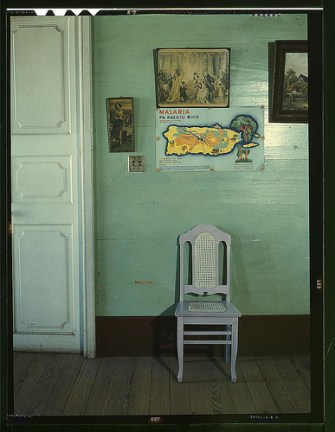 While this very blog is a humble attempt at engaging in a more meaningful coversation about design as a vehicle for and an enabler of social good, this is a gargantuan task that needs to recruit everyone from design writers to designers themselves to educators to policy makers and beyond. It requires a cultural shift in perspective that no longer acclaims an overpriced “eco-friendly” chair – never mind the human rights violations in the factory that produced it and the environmental impact of shipping it from China to its Beverly Hills mansion destination – as a feat of do-good design and instead recognizes it for what it is: A means for those in the seat of privilege to rationalize their expensive taste. It requires a new vocabulary for the very purpose of this sort of design. Just as IDEO made “design thinking” the definitive way to think about design as a problem-solving tool, we need a new term – “design feeling”? – for thinking about design as tool of empathy and humanitarian good.

And this shift won’t happen until we begin to think, talk and write about design to stand for, not design to sit on.

How “Eureka!” Affects the Brain