Little has been said in Pyeong about Skijoring, the famed Norwegian skiing competition in which the racer is pulled along by a horse, or in some instances, a pack of dogs. While it was included as a demonstration sport at the Winter Olympics in St. Moritz, the committee never made it official for global competition. That didn’t stop Minnesotans from enjoying an “extreme horse” version of Skijoring this past weekend.

Demonstration sports offered fringe athletes a chance at the big stage. Glima, traditional Icelandic wrestling dating back to the Vikings, was included in the 1912 Summer Olympics. Unofficially, demonstration sports began in 1900 in Paris, though it took a few editions for the committee to include these aspiring events on the official roster. The consensus was: “we’ll see how this goes.” 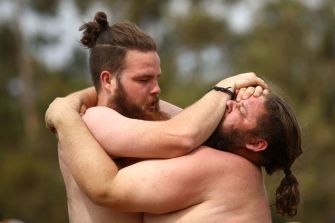 Fighters wrestle as they compete in the Glima Tournament of Viking Wrestling as part of the St. Ives Medieval Faire on September 24, 2017 in Sydney, Australia. (Photo: Mark Kolbe/Getty Images)

Some of the sports are well-known: baseball was included in the 1984 games in Los Angeles and taekwondo in Seoul in 1988. The last Olympics to include a demonstration sport was in 1992, when roller hockey, taekwondo, and Basque pelota, a Spanish version of racquetball, was featured in Barcelona.

A number of sports have used the Olympics as an opportunity to hold separate tournaments, such as a 2008 Wushu tournament in Beijing and wheelchair racing at the Paralympics. For the 2020 edition in Tokyo, a few sports are potentially being presented alongside the Olympics; candidates include wushu, a full-contact Chinese martial art, as well as surfing, squash, climbing, and bowling.

Here are a few of the more interesting sports to have been featured, officially or not, during the twentieth century:

The 1900 Parisian Olympics included nine shooting events, such as the 300-meter free rifle and trap shooting. A group of French men decided to fire cannons during the festivities in a series of seventeen events. I’m not sure what they were aiming at, but I’m sure it was rather loud.

The British had an idea in 1908: trade out horses for bicycles, grab a stick, and get cracking. Today there is even a world championship which, going by the video above, is attended by more riders than fans. The one-point loss to India must have left Canadians rather sore, as was the riders who faceplanted from their chariots.

Bavarian curling, or “eisstocksport,” has been described as a mixture of curling and pétanque. Included in Germany in 1936, it returned for the Austrian edition in 1964. While it’s been out of the Olympic spotlight for some time, the 2018 championships recently took place. The sport looks to me like it would be perfectly at home as a boardwalk game at the Jersey shore.

Is it basketball? Is it volleyball? In second grade we were assigned to invent a sport, teach it to the class, then play it. I created a weird amalgam of kickball, baseball, and football. That’s what korfball reminds me of. A hundred thousand Dutch men and women play. If I lived near a korfball court, I probably would too. It’s Olympics heyday happened in Antwerp in 1920 and again eight years later in Amsterdam.

The French again made a sport where none existed by including rescue, resuscitation, and first aid and branding it as an athletic competition in 1900. They are not alone: competition among lifeguards is a common practice. There’s even a Lifesaving World Championship, with numerous competitive lifesaving groups across the planet.

Yes, that happened, in 1988 in Calgary and 1992 in Albertville, France. I’m not quite sure how to describe it—part roller disco, part jazz hands (with poles), big part eighties hair—but by watching German ski ballet rock star, Hermann Reitberger (who won the competition in ’88), you’ll get the idea.

Confession: this has never been an Olympic sport. But I was recently talking to a yoga and cycling student of mine, and he informed me that he’s an American champion wife-carrier. He’s currently training for the world championships in Finland. And it is simply amazing. For 253.5 meters you carry a woman, who weighs at least 49 kilograms—if underweight she’s burdened with a rucksack—across two dry obstacles and one water obstacle. Prizes are not only given for the best time, but also for costumes and the most entertaining couple. Bonus: you don’t actually have to be married. An official rule is that you must enjoy yourself. How this incredible sport has slipped by the Olympics committee is beyond me, but obviously, it’s time that changed.

New e-skin displays your vital signs on your hand

Nanoscale mesh e-skin can turn your skin into a wearable display.