From a pure numbers perspective, Crazy Rich Asians is a modest success story. Its filmmakers turned down aguaranteed Netflix payday for a risky theatrical release, and the gamble paid out a cool$34 million in the first five days (reported production budget $30 million). That lands it as thebest debuted rom-com since Trainwreck(2015). A93 percent “Certified Fresh” consensus on Rotten Tomatoes and good word of mouth will likely keep its box office streak alive for some time. Even so, it has a ways to go before challenging therom-com champions of yesteryear.

But even if Crazy Rich Asians doesn’t do summer blockbuster numbers, it remains a triumph worth celebrating. It is the first studio film since The Joy Luck Club (1993) to feature an all-Asian cast. It represents strong Asian women in lead roles. It shows that Asian men shouldn’t be type-casted as comic relief or martial arts masters. They can be heartthrobs, too. While some have argued that the filmerases the diversity of Singapore in favor of the privileged ethnic Chinese,others have countered that similar scrutiny is not placed on white-led rom-coms.

Crazy Rich Asians shook America awake by reinforcing the power of positive representation. To celebrate, let’s look at seven other films that shook America and forced us to reevaluate our cultural barriers. 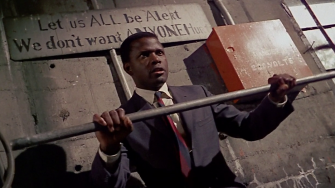 During the civil rights era, African Americans fought for social justice and an end to racial segregation. Many films from the ‘60s onward have tackled the social strain resulting from this restructuring of America’s social fabric, but I’m giving the nod toIn the Heat of the Night.

Released just a few years after Birmingham Church Bombing, the movie opens with Chief Gillespie (Rod Steiger) suspecting a black man for the murder of a Mississippi businessman. The suspect turns out to be Virgil Tibbs (Sidney Poitier), a well-respected homicide detective from Philadelphia. Tibbs joins Gillespie to hunt the killer but must navigate the racially dangerous environment of the deep South to find justice.

Poitier and Steiger deliver sterling performances, and the racial strain between Tibbs and the Mississippi residents ranges from subtle glances to overt proclamations. Looking back, the racial reconciliation may come a little too easy, but it’s all worth the final scene where Gillespie respectfully carries Tibbs’ bag through the train station.

The film won five Oscars, snagging Best Picture from such heavy hitters as The Graduate, Bonnie and Clyde, and Guess Who’s Coming to Dinner. 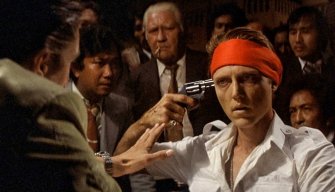 Released a few years after the fall of Saigon, The Deer Hunter vividly illustrated the horrors of the Vietnam War at a time when America was still coming to grips with the trauma suffered by its returning soldiers. In fact, it wasn’t until 1980 that post-traumatic stress disorder would be officially recognized as a mental health condition.

Small-town factory workers Mike Vronsky (Robert De Niro), Steven Pushkov (John Savage), and Nicky Chevotarvich (Christopher Walken) join the U.S. Army to fight in Vietnam. The three friends undergo many hardships until they are ultimately captured. At the POW camp, the mental and physical tortures intensify, culminating in Mike and Nicky being forced to play a game of Russian roulette against each other.

The Russian roulette scene, in particular, is one of the most intense, emotionally wrenching scenes in any movie and dramatically represents the ghosts America’s wounded warriors brought home. The film won five Oscars, including Best Picture, Best Director, and Best Actor in a Supporting Role. 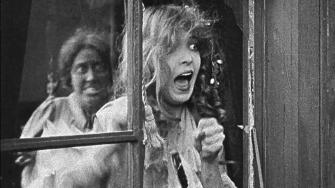 Modern critics and audiences praise movies that break down cultural barriers—Birth of a Nation is not one of them. Made more than a century ago, this three-hour silent film still shakes America today and is included on this list as a sobering reminder of what should never be repeated.

The Birth of a Nation follows the lives of two families, the Stonemans, and the Camerons, through the Civil War and Reconstruction. It is best known today for its pioneering filmmaking techniques, as well as its disrespectful portrayal of African Americans. Played by white actors in blackface, they were displayed as brutish, subversive, feebleminded, and sexually forceful. In the film’s infamous climax, a militia of African Americans attack a white family in a hut, and the Ku Klux Klan, led by the protagonist, ride in like valiant knights to save the day. It’s unnerving, to say the least.

The NAACP staged protests and tried to get the film banned for its historical inaccuracies and maltreatment of black people. Their concerns fell on deaf ears, and audiences made the film a resounding success. One million people saw it in its first year, and it held the box office gross record until Gone with the Wind (1939).

In need of a historical chaser? The same period that celebrated The Birth of a Nation also gave us A Fool and His Money (1912) — the first film with an all African American cast and directed by Alice Guy-Blache, the first woman director. The film was among the era’s many “lost” films until a man named David Navone discovered an extant copy. Today, it is preserved by AFI’s National Center for Film. 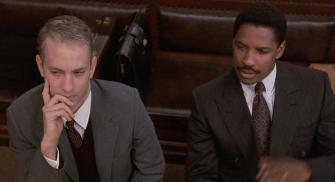 When AIDS first came to America, it was perceived as a “gay disease” —  the initial term for the disease was GRID (gay-related immune deficiency). A potent combination of misinformation and fear led to devastating discrimination against LGBTQ communities, discouraging many from getting tested, which likely helped the spread of the disease.

Philadelphia was one of the first major films to tackle AIDS and America’s homophobic milieu. Andrew Beckett (Tom Hanks) is fired from his job at a prestigious law firm. Believing his termination resulted from the partners discovering his infection, Beckett asks Joe Miller (Denzel Washington) to represent him in a wrongful dismissal suit. Miller takes on the case, but must ultimately overcome his own prejudices to provide fair representation.

Many of Philadelphia’s scenes remain poignant today, such as the locker room talk or Miller’s disgust at being hit on by a gay man. Tom Hanks won an Oscar for his performance as Beckett. Do you think it was for the opera scene? Yeah, it was probably for the opera scene. 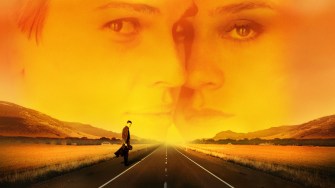 Even today, the transgender community faces a disproportionate amount of harassment and violence compared to mainstream society. One in four trans people have faceda bias-driven assault, and22 percent of transgender people who have interacted with the police have experienced bias from law enforcement. As we saw with the AIDS crisis, the drivers for such discrimination are fear, hate, and misinformation. Representation of trans people in media can help curb such feelings, which is why films likeBoys Don’t Cry are so necessary.

A young man named Brandon Teena (Hilary Swank) moves to Nebraska in an act of self-discovery. He makes friends, finds a girlfriend, and comes into himself. When his girlfriend discovers his secret — Brandon was born Teena — Brandon’s friends turn on him, while the local police turn a blind eye. After a brutal series of physical and sexual assaults, Brandon is hunted down and killed.

Boys Don’t Cry remains a difficult film to watch, and its visceral representation of fear in the face of relentless violence is made even more heart wrenching when you remember it is based on actual events.

Documentaries can shake us awake by shining a light into corners of the world people rarely get to experience. Hoop Dreams portrayed the daunting burdens put on young men who desire to become professional basketball players. Jesus Camp showed the indoctrination of children in an evangelical Christian community. And The Act of Killing unveiled how a community can normalize even the most heinous of acts.

But I’m giving this spot to An Inconvenient Truth for its far-reaching impact on American culture. The film documents Al Gore’s lecture circuit to raise awareness of climate change and its future impacts.

On the one hand, it brought climate change into our public consciousness, informing people on the issue and prompting a slew of activism.

On the other hand, by focusing on Al Gore — the Democratic presidential candidate in 2000’s highly politicized election — the film may have hadthe unintended consequence of further polarizing the issue. With political parties dictating public opinion (rather than the other way around), An Inconvenient Truth’s success may have inadvertently damaged its own cause, strengthening the cultural barriers that needed to be pulled down for progress. 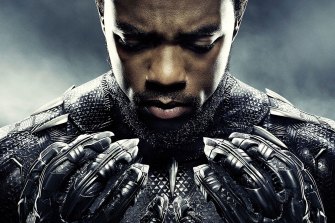 Iron Man, the Hulk, Captain America, Thor, Spider-Man, and Doctor Strange. What do these characters have in common? They are all white, male, mostly middle-aged superheroes Marvel decided to give movies before headlining a minority or woman superhero. They even gave Ant-Man a movie! And be honest, how many of you cared at all about Ant-Man before he was also Paul Rudd?

To be fair to Marvel, Black Panther wasn’t their first black superhero. Children of the ‘90s will remember that Blade was a commercial success. But it wasn’t until 2018 that it felt like Marvel – or any studio really – went all in to combine a positive representation of African culture with a superhero structure. In the film, Prince T’Challa (Chadwick Boseman) returns to Wakanda to become its king, but after a failed attempt to capture international criminal Ulysses Klaue, he begins to doubt his worthiness as the Black Panther. When his lost cousin, Erik Killmonger (Michael B. Jordan), comes to challenge T’Challa for the throne, it fractures the country into civil war.

Black Panther’s results speak for themselves. The film grossed$700 million domestically and roughly $1.3 billion worldwide. It also has thehighest Rotten Tomatoes score of any Marvel film to date.

With the successes of Black Panther, Wonder Woman, and Crazy Rich Asians, hopefully, Hollywood learns its lesson to no longer play it safe. Representation is not the long-odds roll of the dice popular theory believes it is. Today’s audiences welcome it with open minds and, more importantly for Hollywood, open wallets.

Related
Starts With A Bang
Ask Ethan: What are white holes, and do they really exist?
In General Relativity, white holes are just as mathematically plausible as black holes. Black holes are real; what about white holes?
Life
Strange life forms create an “alien” ecosystem in an abandoned uranium mine
Slimy biofilms made up of bacterial and eukaryotic life forms have taken over an abandoned, flooded uranium mine in Germany.
Hard Science
Earth has an eerie “sodium glow,” and astronomers use it to image stars
Air currents in our atmosphere limit the resolving power of giant telescopes, but computers and artificial stars can sharpen the blur.
Health
How saliva changes the flavor of food
“It’s a liquid, but it’s not just a liquid.”
High Culture
Why are flood myths so common in stories from ancient cultures around the world?
Could the prevalence of flood myths around the world tell us something about early human migration or even the way our brains work?
Up Next
Technology & Innovation
IBM files patent for coffee-delivering drones that can sense your mood
“Hang on, Mom. My coffee just flew in.” IBM just filed a patent for drones to deliver coffee to people that they “sense” need it.