Air pollution was responsible for 5.5 million premature deaths in 2013, according to a recent study presented at the annual meeting of the American Association for the Advancement of Science. Despite the promises made at the Paris climate talks, scientists predict deaths from air pollution will rise unless more aggressive action is taken to curb emissions.

More than half of these deaths are occurring in the world’s fastest-developing nations: China and India. It’s also where emissions have risen the most.

“Air pollution is the fourth highest risk factor for death globally and by far the leading environmental risk factor for disease,”said Michael Brauer, a professor at the University of British Columbia’s School of Population and Public Health in Vancouver, Canada. “Reducing air pollution is an incredibly efficient way to improve the health of a population.” 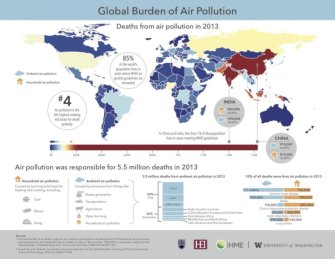 China’s air pollution has been well-documented. Images coming out of China’s major cities show the nation under a cloud of smog. The mayor of Beijing, Wang Anshun, has called his own city “unlivable” because of the air pollution from burning coal, driving, and a growing population.

Economic development in China, India, Brazil, and Indonesia is being fueled by cheap, unclean energies, like coal and fossil fuels. These sources of air pollution are also contributing to climate change. But to say they should halt development seems unfair. When we look at the data from the start of the Industrial Revolution, we see that much of the responsibility for our current climate predicament falls on the United States and wealthy European nations.

By highlighting air pollution as a matter of public health, researchers hope it will be a catalyst to move nations toward adopting cleaner sources of energy.

“Having been in charge of designing and implementing strategies to improve air in the United States, I know how difficult it is. Developing countries have a tremendous task in front of them,” said Dan Greenbaum, president of Health Effects Institute, a nonprofit organization based in Boston.

On the 500th anniversary of the death of Dutch artist Hieronymus Bosch, his native Netherlands is letting the freak flags fly.