Andrew Graham-Dixon, who has been called “the most gifted art critic of his generation,” revisits the scandalous, sensational life of Italian painter Caravaggio and finds in it one model for success in troubled times.

It is a keen irony that the sensitive artist (if sensitivity is a rare perceptiveness and depth of feeling – which, even post-Warhol, I think we can agree is standard equipment for any artist) must ply her trade in the perpetually cutthroat business of Art.

Still, c’est la guerre, and though many worthy poets, novelists, filmmakers, and painters lead brief, tortured lives and end up in the mass graves of art history, a few somehow manage not to. Talent alone does not produce a smiling, virile, nonagenarian Picasso. The artist who is successful in his own time has expressed a worldview that the culture was desperate at that moment to articulate. Let’s be generous and call it 40% talent, 30% an accident of birth, and 30% marketing savvy.

Among pre-mortem artistic successes, Italian painter Michelangelo Merisi da Caravaggio (1571-1610) is remarkable for expressing his sensitivity not only in exquisite, dramatic, chiaroscuro  paintings of everyday life, but also through frequently maiming or murdering people who offended him. In art and in life, he was a survivor in an especially dog-eat-dog arena – that of early 17th century Rome – and his story is a kind of parable of how to seize the love and attention of an indifferent, even lethal world.

Caravaggio – the man, not the artist – gets a bad rap, says Andrew Graham-Dixon, one of the leading art critics and presenters of arts television in the English-speaking world, and the author of Caravaggio – A Life Sacred and Profane. In the seething cesspool of Caravaggio’s Rome, violence was a form of advertisement; it let people know you were, so to speak, the wrong guy to f#@k with. Caravaggio’s notorious life was good publicity, too for the new, gritty style of painting he created – vivid, theatrically lit, psychologically realistic slices of life. 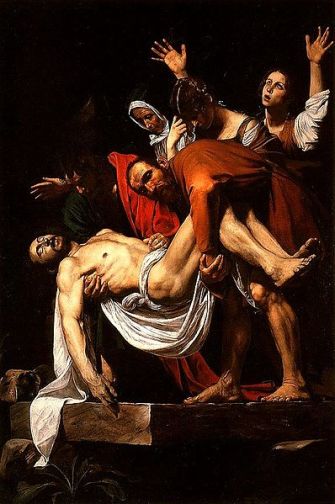 In line with text|Fixed position

Not yet convinced that Caravaggio was something more than a gifted hothead? Consider, then, the coup that launched his career. In league with a picture dealer named Constantino Sparta, whose cluttered shop sat across from the palazzo of a powerful art patron, Caravaggio invented a striking new form of art, chiaroscuro depictions of religious scenes featuring everyday human subjects. As planned, the paintings soon caught the attention of the browsing patron, and Caravaggio was whisked away to a life of fame, fortune, and rock-star-grade notoriety so extreme that he ultimately had to flee Rome under a papal penalty of death.

Perhaps his sensational careerism got the better of him at last. Immediately after his death, Caravaggio’s enemies and critics did such a hatchet-job on him that it took three centuries for art historians to recognize his significance. Still, its wide exposure during his lifetime enabled Caravaggio’s work to exert a powerful influence upon European art and cinema for centuries to come.

There are different types of atheism and atheists. In general, they can be classified as the non-religious, the non-believers, and agnostics.
Up Next
Surprising Science

How the Science of Walking Will Shape Cities

For decades, automobiles have taken priority over pedestrians in city planning offices. That is set to change as we come to grips with what actually makes cities work: pedestrian traffic.