Let’s see. Where to begin.

There’s that copy of Durkheim’s The Elementary Forms of Religious Life I picked up at a second-hand bookstore in Arizona. Though I’ve read the last three books by Antonio Damasio, I’ve been holding onto Looking for Spinoza, untouched. Nearby on the shelf is Why Nations Fail, which I keep meaning to get to, even though I feel like I’m living through it in real time; same with Russian Roulette. I did make it about 200 pages into Piketty’s Capital before getting distracted.

As an avid reader, I try to consume everything in my collection. I’ve donated more books than I hold onto, for space concerns. Still, the hundreds of books in my home office dominate the room, as well as my bedroom and living room, where random copies mingle with my wife’s library. If only there was a word to describe those unread books so that I didn’t have to say, “Oh, I haven’t gotten to that one yet” whenever someone asks about particular editions. 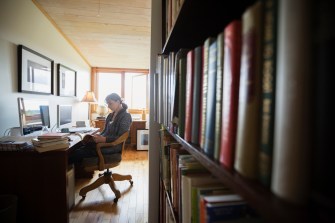 Author and book collector A. Edward Newton had an equally long way of expressing his love for unturned pages:

Even when reading is impossible, the presence of books acquired produces such an ecstasy that the buying of more books than one can read is nothing less than the soul reaching towards infinity … we cherish books even if unread, their mere presence exudes comfort, their ready access reassurance.

Enter the Japanese: tsundoku. The rough translation is “letting reading materials pile up without reading them.” This is one of the most precise words to capture a feeling we Americans have no word for, alongside the German schadenfreude. A few other gems:

Kummerspeck: Meaning ‘grief bacon’, the Germans nail it again when describing the extra weight you carry from emotional overeating.

Tartle: A Scots word for the panic you feel when you forget someone’s name before introducing them. I’ll be using this one often in the future.

Iktsuarpok: Inuits felt that the anticipation of waiting for someone to show up should have its own word. Brilliant.

Pelinti: If you’re in Ghana and you burn the roof of your mouth after taking a bite of hot pizza (or any food), you can scream your displeasure in three syllables. Loudly. Until now the most eloquent way of describing this came from a Nas lyric: “At night / New York / eat a slice too hot / use my tongue to tear the skin hanging from the roof of my mouth.”

Gigil: We recently adopted a Doll Face Persian who was abandoned by its owner. The cat is so damn cute we want to squeeze it all the time. (Yes, that's him above.) The Filipinos condensed that sensation into one word.

Backpfeifengesicht: I’ll likely never properly pronounce this German word, but I well know the feeling of seeing a face badly in need of a fist.

In the digital age, does tsundoku have a future? This concern was entertained by one writer (and fellow book hoarder):

We have dedicated e-readers and phones and tablets that could easily spell doom for the printed page. We have tiny houses and a major minimalism movement, both of which would seem to shun the piling of books that may go eternally unread. We have increasing awareness about resources and "stuff" in general; is there room for stacks of bound paper in the modern world?

I never pay attention to the unread on my Kindle app; at least I can see the doorstop that is Capital. Is that a good thing? Not sure. Every few months I take a two-block walk to the local lending library outside of a Los Angeles primary school to drop off members of my tsundoku clan. Finally, when I decide they'll remain unread I hope someone will enjoy what I could not.

Somehow, though, e-tsundoku just doesn’t have the same charm. That’s why I rarely read on my Kindle app: after two years of only buying digital books, I missed the page turning, cover art, that sense that I was making physical progress on a mental and emotional journey—is there a word for that?

Maybe the concept of tsundoku is doomed in the long run, but one thing is certain: it’ll be around for as long as I’m alive. Given the vinyl record-type reemergence of physical books in recent years, I have faith it’ll survive much longer than that. Nothing digital can replace the feel of an actual book, read or not.

You might think it’s impossible to run out of wind, but Europe’s “wind drought” proves otherwise. And it’s only going to get worse.
Up Next
Politics & Current Affairs

China is investing a gargantuan amount of money in Africa, but it’s leaving many in the global community concerned as to why.