Divorce rates used to be a linear prediction — the longer couples waited to get married, the more the risk of divorce shrank. And why not? Older couples are more financially stable and have a better sense of themselves. But professor Nicholas H. Wolfinger of Family and Consumer Studies and adjunct professor of sociology at the University of Utah has challenged this once true notion. In this new study, he shows how recent data has suggested that for those who wait to marry until their early 30s, the odds of divorce begin to rise by 5 percent for every year.

Wolfinger used data collected by the National Survey of Family Growth between 2006 and 2010. The data revealed that “prior to age 32 or so, each additional year of age at marriage reduces the odds of divorce by 11 percent.” But after that, divorce rates would rise, which he believes has only just become a trend in the last 20 years.

The data was adjusted to control for social and demographic factors — everything from education, race, religion, and sexual history to the size of the cities where the respondents lived. Even after this adjustment, the same conclusions held true: Couples in their late 20s held the lowest divorce rates while couples married in their 30s saw an uptick in divorce rates. 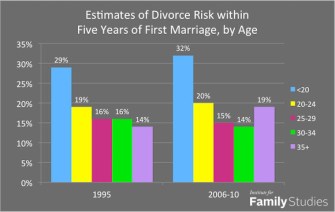 These results are a bit confounding, but Wolfinger has a few suggestions as to the why. The median age for marriage has shifted. Wolfinger adds, “People who delay marriage nowadays for financial reasons marry as soon as they feel they can afford it. These are the people who wed in their late 20s, the years of peak marital stability.” Whereas those who wait and “[remain] in the pool of marriage-eligible singles are the kinds of people who aren’t well-suited to succeed at matrimony (irrespective of their financial well-being).”

There’s also the thought that when you’re single for so long, you may just get used to it. The thirtysomethings “who would have made good spouses now feel perfectly comfortable being single, or living with partners out of wedlock.”

The landscape of marriage has changed over the last decade and this research continues to help us understand how culture continues to redefine it.

On Sept. 23, 2020, it was reported that black licorice was the culprit in the death of a 54-year-old man.
Up Next
Surprising Science

‘The New Yorker’ Earthquake Warning. Another Alarm About ‘The Big One’ That Doesn’t Explain Why We Aren’t Alarmed.

A terrific story about the physical threat of a major earthquake in the Pacific Northwest fails to explain why people don't seem alarmed. That lack of alarm puts the public at risk as much as the shaking Earth itself, and should be part of the story.