A common thread runs through all groups in modern America: anxiety.

According to a new survey from the American Psychiatric Association (APA), Americans are feeling, in general, more anxious than they were in 2017. The survey asked 1,004 adults from around the country to rate their anxiety in five areas: safety, health, finances, relationships, and politics. Results showed: 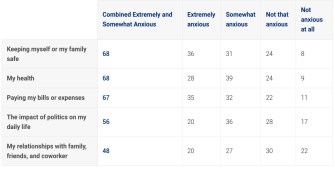 It all amounted to a five-point increase in the country’s “national anxiety score,” which is scored from 0-100, and rose from 46 in 2017 to 51 in 2018. All groups in the survey reported year-over-year increases in anxiety, but not equally across race, gender, or age. Results showed:

The survey also asked about attitudes on the issues of mental health, prescription drug abuse, and gun violence.

“Our poll findings show that Americans are increasingly aware of the problem of opioid addiction and increasingly believe people can recover,” said APA CEO and medical director Saul Levin, M.D., M.P.A. “The crisis has become personal to many and they want to see treatment available for those affected. We are ready to work with the Administration and Congress to curb this national epidemic.”

The APA suggested a few ways Americans can alleviate anxiety.

“This poll shows U.S. adults are increasingly anxious particularly about health, safety and finances. That increased stress and anxiety can significantly impact many aspects of people’s lives, including their mental health, and it can affect families,” said APA President Anita Everett, M.D. “It highlights the need to help reduce the effects of stress with regular exercise, relaxation, healthy eating and time with friends and family.”

Related
Hard Science
Some earthquakes last for seconds, others for minutes — and a few for decades
What do you call it when the Earth shakes for three decades?
Sponsored
What childhood “money story” is shaping your financial behaviors?
Here are the signs that you inherited “money anxiety” from your parents.
The Present
The “maritime Indiana Jones” who salvages shipwrecks now wants to tow icebergs
Simple physics makes hauling vast ice chunks thousands of miles fiendishly difficult — but not impossible.
Neuropsych
Inside the brains of aging dogs
In a citizen science project, thousands of pet dogs are helping scientists to understand what happens to memory and cognition in old age.
Neuropsych
The most common source of awe might surprise you
It’s us.
Up Next
Technology & Innovation
If the future is full of VR addicts, should we bring them back to reality?
VR technology shows no signs of slowing down. We need to start asking the question of how we deal with those of us who become addicted to the wonders VR offers.