When deciding whether to have a drink or not, the classic line is, of course, “Well, it’s five o’clock somewhere.” The expression dates back to a time when early evening was the time to begin imbibing, but those days are apparently gone, according to survey data gathered by Family Center for Recovery and turned into some intoxicating infographics about intoxication. Seems day drinking has become a thing for many of the 1,000 people they interviewed. There’s a general undertone of guilt to drinking while the sun shines — after all, it’s the time of day most of us are supposed to be being productive, not gently pleasantly (or not) sloshed. It seems, though, that the guilt isn’t necessarily a show-stopper for many, or maybe there’s even a kick in being a little bad.

All infographics in this article are by Family Center for Recovery.

What we drink about day thinking. Is that right?

The first things we might consider is how we feel about early imbibing, and how also what we think those around us think about it: What we think and what they think.

First, there’s what we think. In the top section of the infographic below, respondents were asked when is it just too early in the day to drink. Shockingly, any time after 10 am is deemed late enough by a majority of people. Almost half, 44.02% says 10 am is too soon, but that means at least half says “no prob.” By 2-4 pm, hardly anyone, 15.64%, thinks it’s too early.

But that’s not what we think others think, as gauged by when we say is a socially acceptable time to drink. With an unsurprising uptick for “martini lunches” between 12 to 2 pm, we imagine others believe the proper start of boozing skews much later, beginning at traditional Happy Hour, 4-6. It’s in that same time period that respondents say day drinking turns into night drinking, which means that they believe normal people don’t, in fact, day drink, really. But, er…

What are day drinkers drinking?

The libations women preferred by women and men are pretty much the same, though in different proportions. The top overall rocket fuels are beer, Mimosas, Bloody Marys, Margaritas, and wine. Interestingly, women prefer reds, and men whites. Hic. Beer and white wine edge out Mimosas as red wine suggest more gents are getting spit-faced than women. 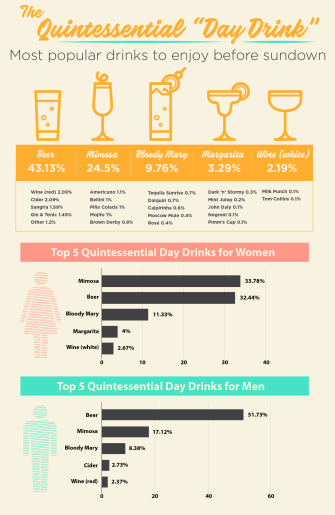 But why is this happening? Social media. Of course.

Why, one wonders, would anyone broadcast that they’re zonked at midday? Some report a desire to make others feel FOMO or left out. We’re most intrigued by the adventurous 2.98% who feel that sharing their alcohol habit is brand-building! For what career? Pirate?

Not shockingly, the platform on which one chooses to drunk talk pretty much follows the usually generational curves, with boomers especially unable to stop sharing their sizzled thoughts on Twitter. 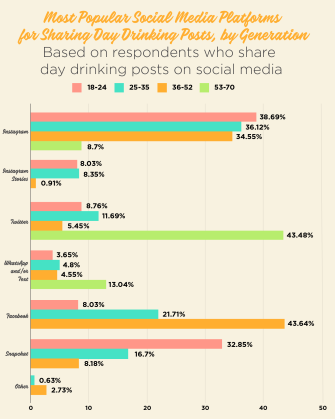 Young adults and millennials favor Instagram, of course. Particularly baffling-slash-comedic to followers must be the Instagram stories that about 8% of these tipplers spin: A kind of drunk and disorderly narrative.

Aside from the effect alcohol has on one’s ability to function effectively — unless you’re “brand-building” — there’s that other cost: It’s spendy. Family Center for Recovery calculates that the average amount spent on a single day of drinking is $80.84. Per day. That’s $404.20 per five-day work week — no wonder you’d want to hide from sober reality. For women, the daily average is $67.17 per day, for men, it’s $92.28. Purchasing high-priced drinks at a dining establishment is especially wasteful. 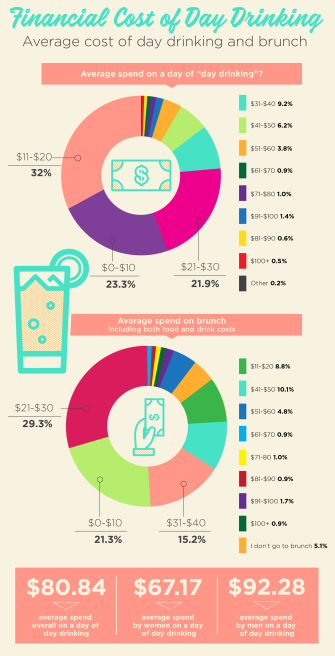 The final infographics cull the response to three questions, by generation, and on weekdays vs. weekends:

In general, all age groups consider drinking early on the weekend more acceptable. The largest group of people who have liquor with their cornflakes during the week is about 10% of older millennials and baby boomers. Both smoking pot and drinking on a weekend largely get more of a pass, at around 40% approving, from all age groups except boomers. Maybe they’ve switched to Zoloft.

But seriously, don’t forget to tip your waitress

Just because we seem to be getting more comfortable with daytime drinking doesn’t mean that it’s a good idea to consume alcohol in daylight. Or in the dark, for that matter. While getting a bit loopy can be fun, of course, it’s also worth remembering that being bombed most likely does not represent your brain’s peak function. And drinking too frequently doesn’t make your liver happy, either. Forget about driving.

If you think you or someone you know has a problem with alcohol, please take it seriously. MedlinePlus can help you recognize a problem, and places like by Family Center for Recovery can offer a supportive environment for recovery.

Related
Neuropsych
Daily caffeine intake temporarily alters your brain structure
Compared to people who took a placebo, the brains of those who took caffeine pills had a temporarily smaller gray matter volume.
Thinking
Why you should laugh at yourself, according to Seneca and Nietzsche
“It is more human to laugh at life than to lament it.”
Hard Science
The violence of the Tonga eruption is a wake-up call to watch other submarine volcanoes
Out of sight, but not out of mind.
The Present
How circular economics can make us happier and less stressed
Entrenched business wisdom says that community-led economic systems are pure fantasy. Douglas Rushkoff disagrees.
The Learning Curve
The art of asking the right questions
The right questions are those sparked from the joy of discovery.
Up Next
Mind & Brain
How physics makes your brain light up
fMRIs reveal that physics causes activity in some surprising areas of the brain.