If you’re not familiar with it, there’s a fun-slash-disturbing site called texts from last night where you’ll find texts that people fire off, typically in the wee hours, to the site. A text there “largely exists because of the tendency to press send more easily as the night turns to morning,” as their About page says. The submissions tend to be personal and can be downright raw, and a lot of the texts are very funny, if somewhat twisted — the site is full of sex, drugs, and alcohol. The people at addiction.com realized these unguarded texts offer a particularly unvarnished look at America’s after-dark habits. After reading 71,316 texts, they were able to draw some unexpected conclusions about recreational substance abuse in America, or at least among people who text the site.

The textsfromlastnight site dedicates separate areas to best nights and worst nights, where people submit texts that colorfully explain why an evening was one or the other. These help give us an idea of how each writer’s drug experience went.

All of the visualizations are by addiction.com.

The most popular drug to text about

Maybe it’s because they’ve been somewhat normalized by shows like Breaking Bad, but methamphetamines sit atop the list of drugs people text about. Meth is mentioned or referred to in a whopping 25.91% of the texts addiction.com found. According to the organization, 2016 saw 7,000 deaths from meth (There were nearly 10,000 ER visits due to meth in 2009.) Young adults who aren’t quite that unlucky are still at increased risk of brain bleeds and strokes. It’s worth remembering, though, that saying people texted most about meth doesn’t necessarily mean they were ingesting it more than the other substances. 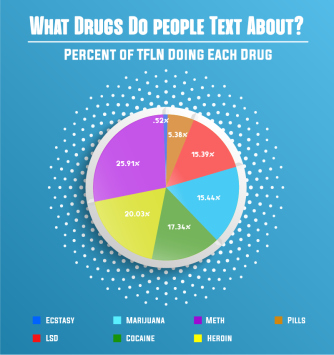 Grass, LSD, pills, and just a little bit of ecstasy were the other substances frequently cited in texts.

Overall, addiction.com found that drugs were twice as likely to be mentioned for best nights than worst. This is not too shocking, given that the addictive potential of drugs stems from their providing an attractive experience. The associated risks are more likely to be long-term and not a pressing issue while actually high, accidental overdoses and deaths notwithstanding. Meth was nowhere near the top of the list for good experiences, though. That dubious “honor” went to cocaine, with marijuana and heroin second and third. 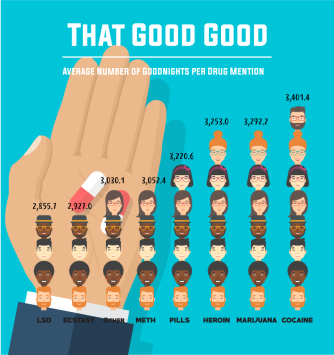 When it comes to positive texts, texts’ area codes reveal that different regions may have distinct preferences for one drug over another. Three southern cities are worthy of note, moving up the coast: Atlanta (area code 414) texters go for cocaine, Charlotte (704) thumbers enjoy pills, and meth is linked to good nights in Alexandria (703).

Pot-texting capital of the U.S.? Surprisingly, it’s area code 248: Oakland County, Michigan, just north of Detroit. addiction.com reports that pot is the most-consumed drug worldwide, with “more than 11 million teens and young adults between 18 and 25 are using marijuana every year.”

Connecticut, a booming state in heroin overdoses, nonetheless has the most positive texts about the narcotic. 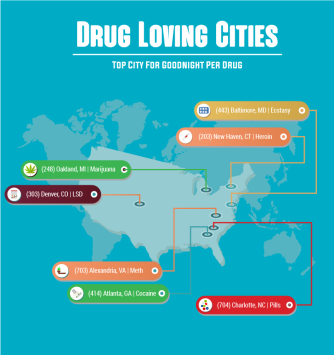 As far as having a good ol’ bad time, testers most frequently mentioned heroin. Second place went to “Other,” which addiction.com tells Big Think refers to an assortment of synthetic drugs. 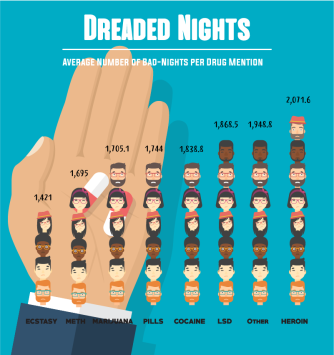 In fact, when it comes to bad drug nights, things are more split up than they are with positive reports. For instance, more people have issues with ecstasy in both Austin (area code 512) and Chicago (773), and bad reports about cocaine in both Pittsburgh (412) and Denver (303). Denver also ranks highly for bad heroin experiences. Meth gets the most negative texts in Philadelphia (215). 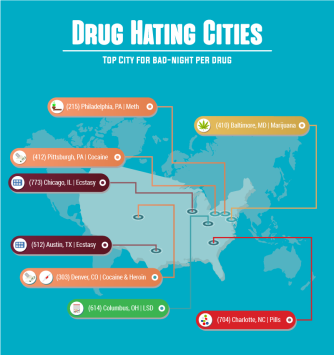 addiction.com wraps up their study with a quartet of memorable quotes, though even a few minutes at the textsfromlastnight site will convince you there’s plenty more out-there stuff to read. 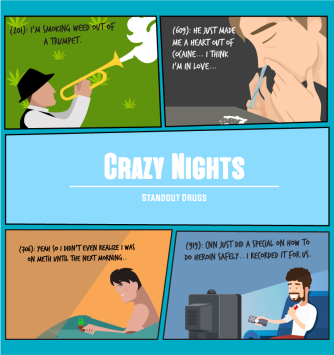 While the writers of these texts post for fun, their ramblings are revealing of a drug subculture that’s ultimately not too funny at all. addiction.com has lots of information about drug dependency and how to combat it.

Related
Neuropsych
Asthma drug brings back “lost” memories
In a study involving mice, scientists used two different techniques — one optogenetic and one pharmacologic — to recover “lost” memories.
Stoicism: How to turn your sadness into strength
Chloé Valdary shares the ancient Stoic principle that can defeat modern despair.
▸
7 min
—
with
Chloé Valdary
Hard Science
3 new studies indicate a conflict at the heart of cosmology
The Universe isn’t as “clumpy” as we think it should be.
Starts With A Bang
The sober truth about finding the Universe’s first stars
The Universe certainly formed stars, at one point, for the very first time. But we haven’t found them yet. Here’s what everyone should know.
Life
Our antidepressant drugs are affecting animals and ecosystems
A toxicologist explains the impacts of antidepressants on fish — and no, they’re not getting any happier.
Up Next
Technology & Innovation
Ingestible “bacteria on a chip” could help diagnose disease
Ultra-low-power sensors carrying genetically engineered bacteria can detect gastric bleeding.